Our second full day in Madrid was all art, all day, yet again. We  went to the Sorolla Museum first. Sorolla was a Spanish Impressionist painter, and the museum is located in his house (well, it used to be his house). Our friend Meg McComb recommended it, and as she is never wrong about these things, we went on faith even though we were both unfamiliar with the artist’s work. We’re glad we did. He was an amazing painter, and I enjoyed his work enormously. 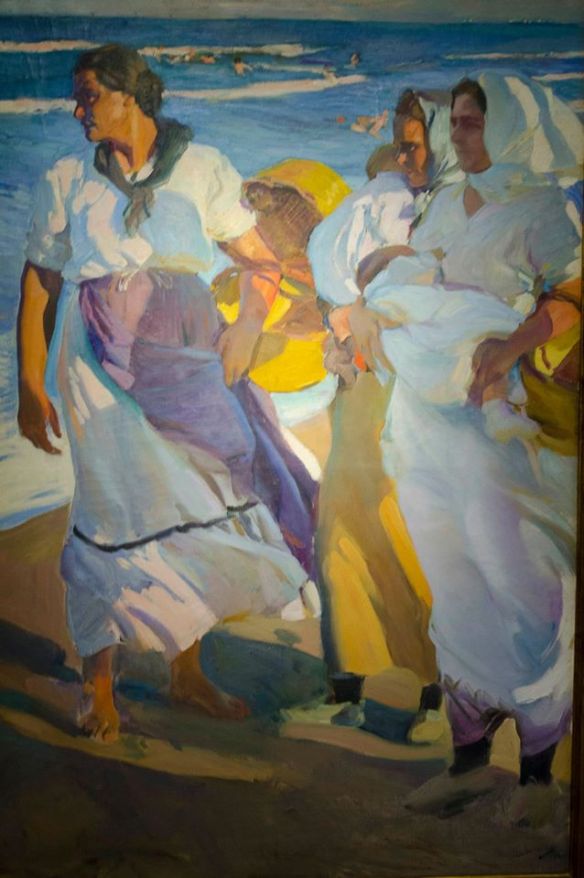 But perhaps the most interesting thing about the museum is the context in which the work is displayed: his home. He had it built once he became successful as a painter, and from the looks of it, he did very well indeed. As in many Spanish homes, it has a shady garden with fountains and flowers and tiled walkways. Inside, the rooms are light and harmonious. The family’s furniture and keepsakes are on display. He obviously adored his wife and three children, as paintings of them are everywhere. It gave me the feeling of a life of contentment and balance, filled with family joy and enjoyment. Many artists lived lives of poverty and desperation, or even chaos and madness, but Sorolla proves that it is possible to be both an artist and a happy person. 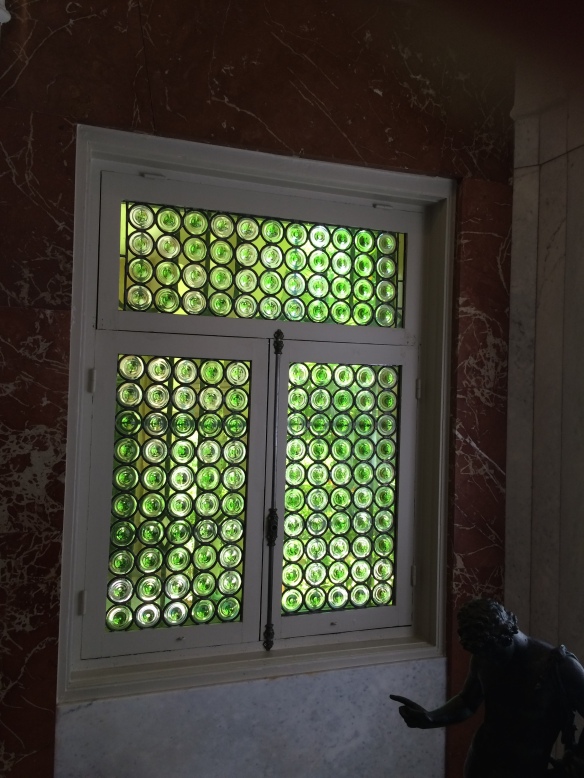 Whew. That’s a relief. Then we went on the Reina Sophia Museum, which is Madrid’s museum of modern art. Tom wanted to see “Guernica” by Picasso in particular. Guernica is enormous, filling a gigantic wall with its expressive agony. I tried to see the painting as contemporaries must have seen it–something unprecedented and revolutionary. Sadly, I failed. I’m afraid when it comes to modern art, I am kind of a barbarian. I don’t mean to say I dislike all modern art, but the art of the early 20th century, so new, experimental, exciting and fresh to many, leaves me pretty cold. Cubism, abstract expressionism, Dada, mechanistic surrealism, etc. etc.–meh. Picasso does nothing for me. Rothko pisses me off. But I love Dali. They had some of his early work, when he was doing cubism. I have no idea whether it is considered good cubism or not; I can’t tell. But I love his later works in their meticulous rendering of the impossible. The Reina Sophia has several of these paintings, and I enjoyed them. I also enjoyed Dali’s artistic posing, his ridiculous mustache, and his pretentiousness. It was all so–I don’t know–endearing. He appeared on the Dick Cavett Show many years ago. Dali was going on and on about some nonsense, and Cavett leaned over and wriggled his fingers at the artist and said, “Boogie  boogie!” That has been my response to artistic pretentiousness ever since. (I love Dick Cavett, too.)

“Memory of the Woman Child” by Dali

We passed this living wall in Madrid several times. It seems like a great idea for cities. It cools the environment and refreshes the eye. Plus, oxygen.

We had dinner at a restaurant called D’Fabula, and it was pretty fabulous. We walked there as my feet seemed to have toughened up a bit. It was still pretty hot, even at night, so we ate inside. Everything was delicious except for the cheesecake I ordered for dessert. It came with a scoop of the most intense and wonderful vanilla ice cream I’ve ever tasted, but the cheesecake itself might have been from Denny’s. The waiter asked me about it and I told him what I thought. He went away and came back with two scoops of the fabulous ice cream, which Tom and I enjoyed together. On the way back, we took a different route and wandered through plazas full of people eating and drinking. There was music, and several of those people you see in Europe who dress up as robots or Don Quixote or knights or whatever and hope you’ll give them money. I think Madrid is a very fun place–for people who go to bed later than we do. Even so, we have rarely gotten to bed before midnight. 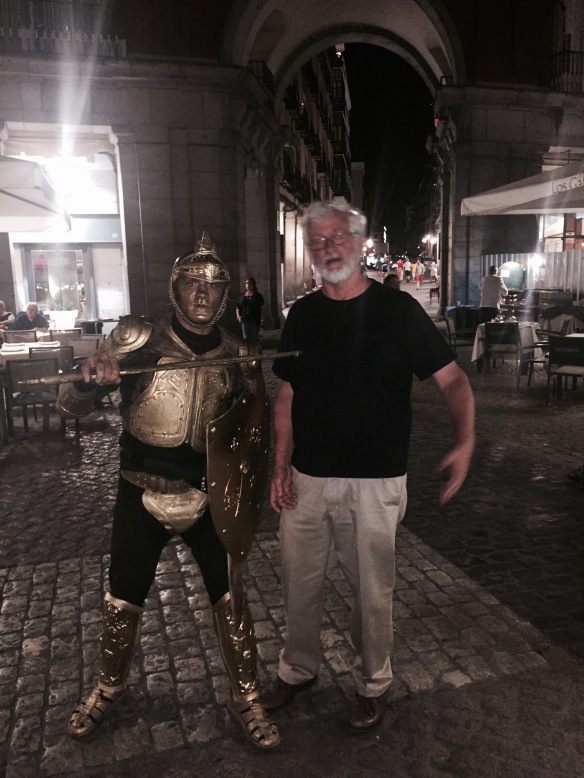 Tom being attacked by “conquistadore.” El Conquistadore didn’t like his tip.

Yesterday we had breakfast, did a small amount of shopping, then left Madrid. I say that as though it were easy, but it wasn’t. Tom walked to the parking lot down the street from the hotel–which I was delighted to leave–and couldn’t get the machine there to accept his ticket. Until he asked two Spanish gentleman to help, and then the machine was happy to accept the ticket, but would not accept his EU50 bill. I was waiting at the hotel with the luggage, so he came back and explained he needed to get some change. He had to walk nearly to the Prado before he found someone to break the bill, then came back and we both walked to the garage. So that all took an hour or more. Then our GPS system directed us all over Madrid, down byways and odd little streets, until we finally found ourselves on the road to our next destination, Ezcaray, in the Rioja wine country. The landscape changed very gradually from the flat, red-earth plains of the south to the limestone soil and mountains of the north. We went from olive groves and chaperral to vineyards, forests and green meadows. Ezcaray lies in a deep valley, approached by a steep, winding road that switchbacks down a mountainside. Tom drove white-knuckled all the way. Being brave doesn’t mean you are never scared.

We are staying at Echaurren, a Relais et Chateaux hotel with four restaurants that make it a gastronomic destination. It is housed in a building with an ancient stone exterior, and a very modern and sleek interior. We have a king-size bed. After the muggy postage-stamp-sized bed in Madrid, it feels like sleeping on a football field–only presumably more comfortable. The room looks out on an ancient church with swallows swooping around it. The room has every comfort possible, at least every comfort I could ask for, and I love it. 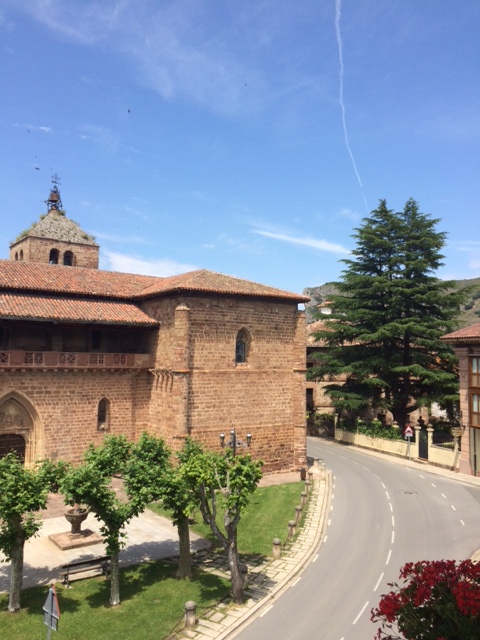 The view from our room

The only fly in my happy ointment is that when I fell in the parking garage, I dislocated a rib, and it is painful. The nearest chiropractor is in Bilbao, an hour and a half drive from Ezcaray. However, Bilbao has the Guggenheim Museum, which is supposed to be worthwhile for the architecture alone, so I made an appointment for tomorrow and we will kill two birds with one drive. In the meantime, Spain has excellent painkillers, so I am not doing too badly, though I am perhaps a tad fuzzy-brained. Tom assures me that I am, actually.

2 thoughts on “More Art, No Palaces”