A few more thoughts on art in the Prado:

There’s a copy of the Mona Lisa by Leonardo Da Vinci in the Prado. It was definitely painted under Leonardo’s supervision, if not by the Master himself. If you have been disappointed by the Mona Lisa that hangs in the Louvre, I strongly suggest seeing this if you get the chance. The one in the Louvre has a yellowy-green cast; this one does not, and has clear, fresh colors. The Louvre version has severe cracking in the paint and warping of the underlying poplar wood; this one was painted on more expensive and durable walnut and is in excellent condition. The Mona Lisa in the Louvre is sequestered in an acrylic box and is usually surrounded by a horde of tourists who are not at all interested in allowing you to get a closer view; the Prado version hangs unimpeded and ignored. You can walk right up and examine it as closely as you wish. This is the Mona Lisa as it must have looked 500 years ago.

I wanted to see Velasquez paintings. The great thing about Velasquez is the faces–he’s one of those artists who are able to paint the soul and personality of the subject. There was one entire room with nothing but paintings of the jesters of King Philip IV and his court. One of the paintings was of a dwarf who looked very like Peter Dinklage, down to the “Don’t fuck with me” look in his eyes. 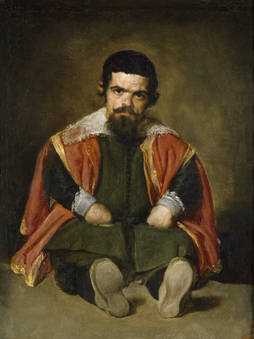 “Sebastien de Mora” by Velasquez. Or a very early portrait of Peter Dinklage. 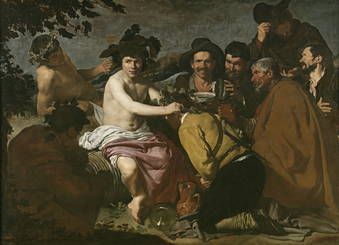 This is an allegorical painting called “The Triumph of Bacchus.” Bacchus is highly idealized, but if you look at the other faces, they are very real, with great personality.

The Prado also has a number of Rubens, whom I’ve always enjoyed. First, because of his exuberance; he doesn’t just paint a horse, he paints a drama composed of glossy, bunched muscles, rolling eyes, and streaming, flossy mane and tail. (Frankly, his horses are a lot better than Velasquez’s. One or two of V’s horses looked biologically impossible.) His compositions are full of life and motion–even when the subjects themselves aren’t actually doing much. And then there’s the acres of glowing, pink flesh. The man loved ladies, and he hated to skimp on avoirdupois. The more, the better–that was Rubens. He would have adored me.

This one–Rape of the Daughters of Leucippus by Castor and Pollux–illustrates both my points about Rubens: horses and women. Leafing through Jansen’s History of Art as a child, I I thought those guys must have been INCREDIBLY strong.

Ezcaray, where we currently are, is a village of 2,000 residents. The village also has 12 hotels and more restaurants than you would think possible in such a small place. Apparently, there has been continuous human habitation here since the Neolithic Age, followed by Romans, Visigoths, Moors, etc. Over lunch today, we had a discussion with a family about the area–they come every year. The father is from La Rioja (the region we are in), the mother is Brazilian and they live in Brazil. She told us about a ring set into a pillar on the square. The tradition was that if a bandit, Moor, or other outcast could make it through the town (with people throwing fruits and vegetables at them) and grasp the ring, they were granted sanctuary and could settle here. Whether apocryphal or not, here is the ring. It would look more impressive without the pink flyer pasted onto the pillar: 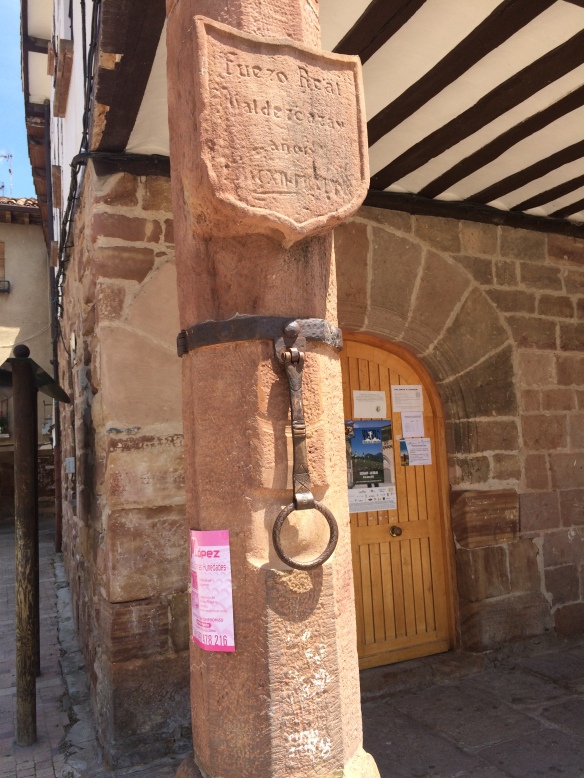 The Ring of Sanctuary. I may use that for a book title some day–it has a nice ring to it.

It rained the evening we arrived, and it was pleasant to watch the rain fall against the backdrop of the ancient church across the way. The temperature has been in the 70’s–a nice contrast to the heat of Madrid. The town is peaceful and tiny, bordered by small rivers and sheltered by the steep valley walls. So good to be here, after so many cities.

Although all the art, culture and history tends to be concentrated in cities, I just don’t like them. There are too many people, too many cars, too much noise–just too much of everything. My idea of a nightmare vacation is New York City. Cities just kind of oppress me in some way. I like being in the country or in small towns, closer to nature.

Our first day, we just walked around the town, taking pictures. We stopped to eat at a little bistro. It was quiet and relaxing after all the sightseeing. I am happy to be here.

The view from our hotel room in Ezcaray

A pretty little fountain in a square in Ezcaray. People sit here to read.