Our last day in Spain finally arrived. We decided to get some breakfast and head down to La Rambla, a long mall that leads down to the harbor. Traffic goes by on either side of a pedestrian mall, with booths and kiosks in the middle and shops on either side of the traffic lanes (where shops are usually located, actually). We were warned that this was a prime area for pickpockets. so we were on the alert.

There were tons of people walking la Rambla. Most of the kiosks were selling the same old stuff we had seen everywhere else in Spain–cheap “Flamenco” shawls, a Spanish dancer doll (the exact same one in every city), t-shirts–augmented by Barcelona-specific stuff like Gaudi-inspired plates and keychains. Then we came to the open-air market, La Boqueria. This was a feast for the senses, and if we had not already had breakfast, we would have bought something delicious here. The stalls were piled high with fresh fish and shellfish; eggs of all kinds, from emu to ostrich to quail; the obligatory stalls with pig haunches hanging and cured meats on display; every sort of nut you could imagine; dried and fresh chilis; sweets; exotic fruits; piles of tripe, lambs’ heads, kidneys and other offal meats; spices, teas and coffees. it was overwhelming and beautiful. 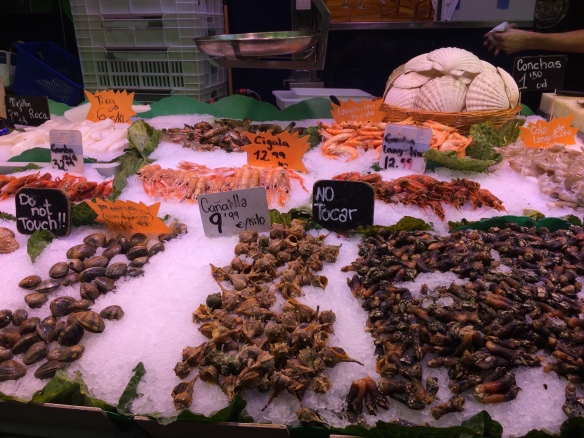 Every sort of egg 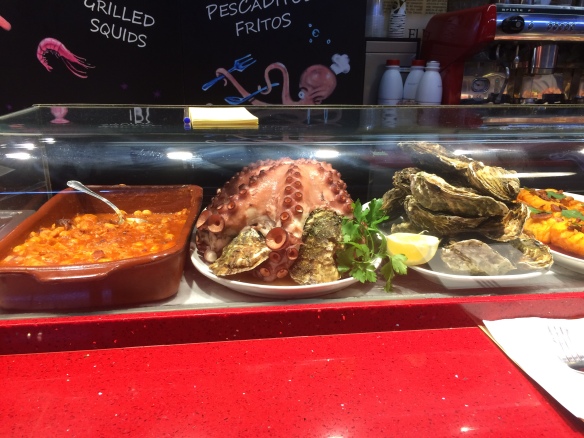 After this feast for the eyes, we continued down La Rambla, stopping just before the harbor to photograph the living statues. There was Don Quixote, a person dressed like a Salvador Dali painting, a Remington cowboy statue (probably the most boring, despite his dramatic pose), a demon (entertaining), a “bronze statue” of Galileo, and several more. 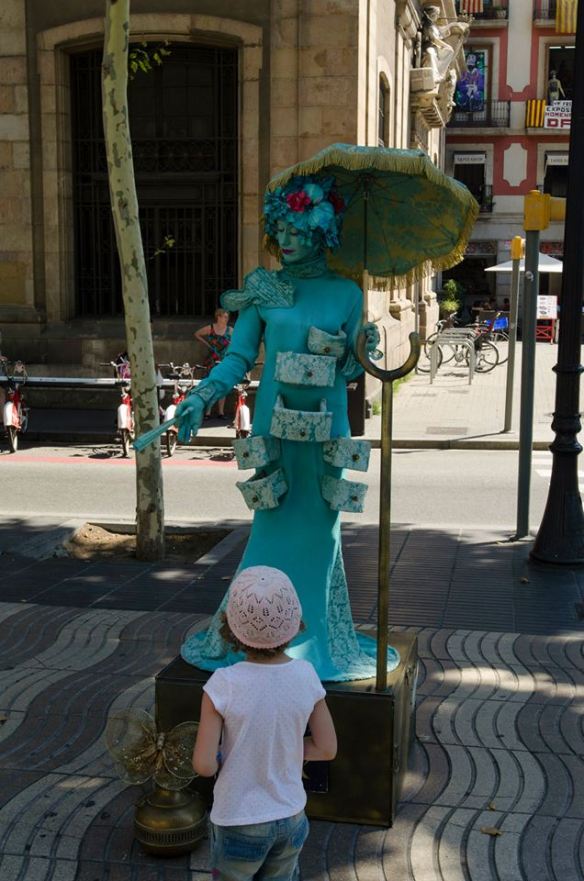 By that time it was hot, and we were reasonably near the Barcelona Aquarium, so we went there for a few hours. For people whose local fish museum is the Monterey Bay Aquarium, the Barcelona Aquarium cannot measure up, but I did see some interesting fish I hadn’t seen before. Unfortunately, labeling was kind of random. You’d see a label above one tank, with no sign of the supposed denizen, then see the same fish in another tank that had no such fish identified as being there. Nonetheless, it was a pleasant couple of hours out of the heat. I do think someone tried to pick my purse in the aquarium. I was waiting in line to buy mineral water and carelessly left the zipper open, displaying credit cards and cash. I saw a hand creep across the ledge in front of me, heading toward my purse. As soon as I clocked the hand, it suddenly became very interested in the surface of the ledge, which had nothing on it but crumbs. I zipped the bag.

This iguana had such a pleasant expression that I just had to photograph him. Or her.

I don’t know what this fish is due to random labeling, but I liked it.

In the afternoon, we went to Parc Guel. Gaudi had a house there (designed by someone else), and he designed a beautiful installation in the park that would look very familiar had we actually gone in. We already had tickets to see his house and we wandered around the free area of the park, which is also very Gaudi-esque, but not the iconic installation everybody was lined up to pay for. When we went through his house, I was astonished to find out that despite the over-the-top ornateness and whimsy of his work, Gaudi lived a very austere and simple life. His furnishings were simple and sparse. He cared nothing for clothes or material things for himself. A remarkable contrast.

The area of Parc Guel we did not go in, showing more of Gaudi’s amazing work. 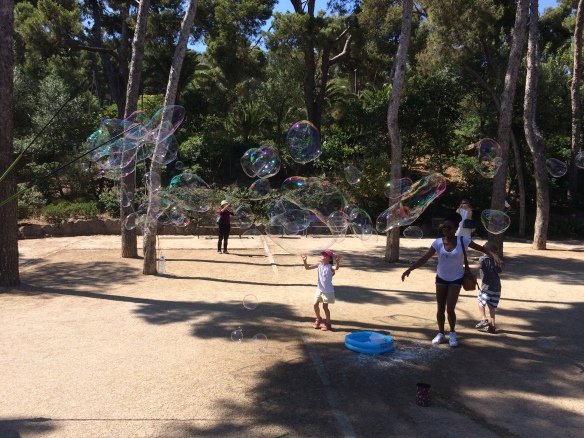 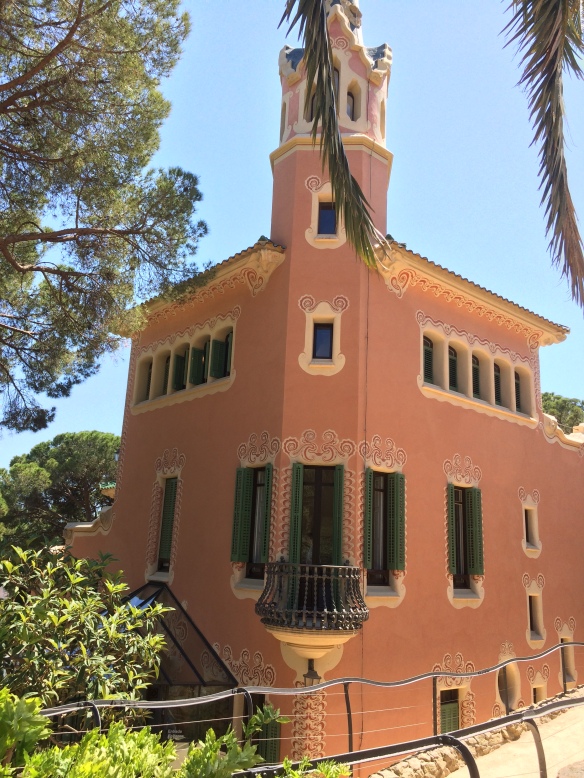 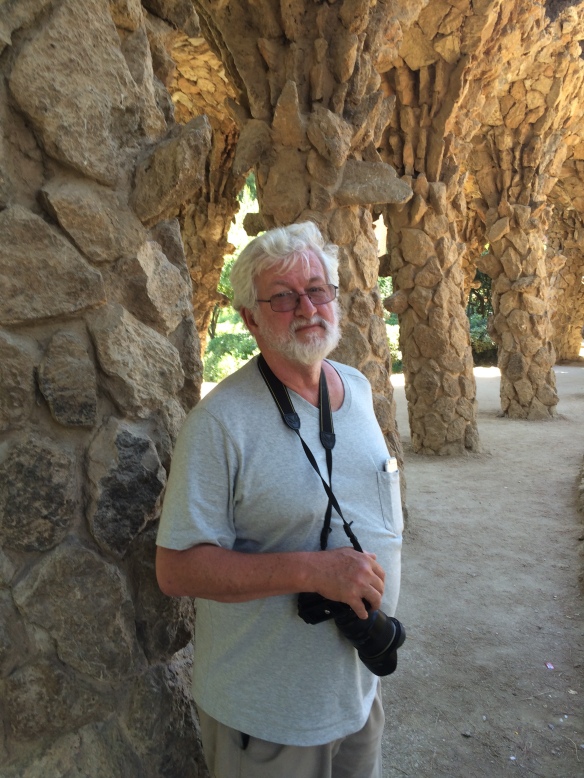 Tom standing under a Gaudi-designed bridge in Parc Guel

We left without paying to go into the most interesting part of the park, which I kind of regret.

We had an early dinner at a boring restaurant where a large group of people (maybe 100 or so) were playing Scrabble (in Catalan? At least they’d have a ready use for all those X’s!), and so to bed.

Adios, Spain. We had a wonderful time!

More soon about a menu that made me laugh and things I will miss/not miss so much about Spain.

2 thoughts on “Scrambling To Get It All In: The Last Day”