We’re in Hafnarfjordur, south of the “big” city of Reykjavík. It’s a little harbor town, and our guesthouse is just a few blocks from the water.

As soon as we left the airport, it was clear we were in a very different place. The highway from the airport to Rekjavik drives straight across a vast, flat, ancient lava flow. The black volcanic rock pokes through everywhere. I didn’t get a photo, but there were masses of purple lupine, yellow daisy-like things, some sort of low, creeping plant with bright purple flowers, orangey-red flowers I didn’t recognize–all growing on ground disturbed by construction or roadwork. The lava itself was largely covered by low grasses and gray-green arctic moss. We drove past one mighty mountain in the distance spewing enormous clouds of steam into the cool air–from its base, not its summit. I don’t know what the explanation is.

The architecture here is quite different from the US. Lots of concrete and glass, and in common with New Zealand, many of the buildings and houses are covered in corrugated steel. Roofs are often steel as well. Our guesthouse, pictured below, is one such steel-clad building. 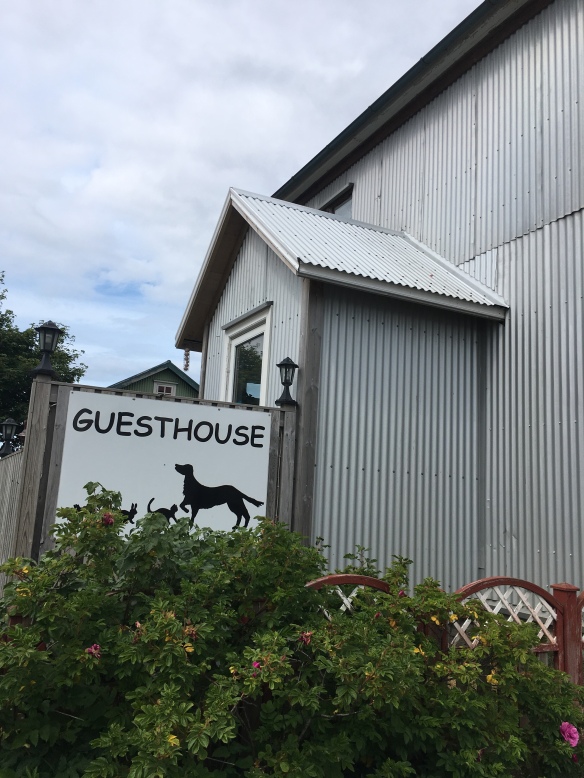 Edda’s side yard. Bunnies are in bed, I guess.

Edda’s Guesthouse is our temporary residence. When we arrived, we just walked right into the living quarters because the doors are never locked. We were given a skeleton key for our bedroom that wouldn’t foil a child. (I gather this is not a high-crime neighborhood.) We share the quarters with others, as yet unknown, which includes a kitchen we aren’t allowed to cook in, a bathroom, and a dining-living room area, all of which sounds much grander than it is. The side yard boasts five bunnies, one chicken, and some dogs and cats. The entire package, including Edda, is a somewhat ramshackle affair, but I am NOT complaining. I am enjoying. Different from the usual is a good thing, and refreshes the soul.

The lava is everywhere, sometimes in enormous boulders, like the one apparently threatening the house above. The Icelanders just build around it or use it in the building. I saw some really creative decorative bricks made with lava embedded in them, and you see all kinds of constructs, walls, fences, etc., utilizing this ubiquitous material.

After getting organized, we drove into Reykjavík in search of lunch. There was barely any traffic, by our standards. And there weren’t a lot of people on the streets, which seemed odd for a city. Some of the buildings are painted with fanciful designs, including one store that was completed covered in painted tropical foliage. It must look strange when it snows. 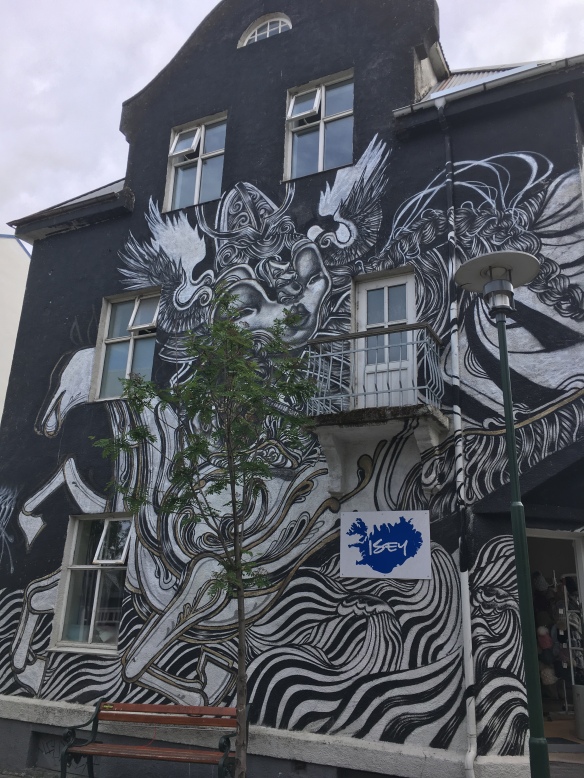 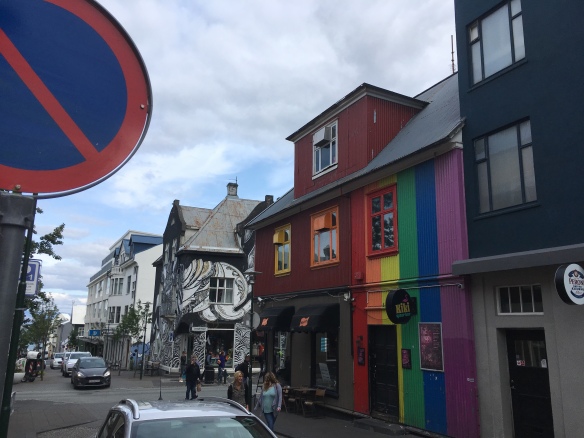 It turns out Iceland isn’t all that cold–not as I’d imagined. Iceland is warmer than New York in the winter due to the Gulf Stream. (I imagine they are talking about upstate NY, though!) it’s been in the sixties today, which is the same as at home on the California Central Coast.

We ate at a restaurant called Snaps!, and I rate our first meal here an A+. Everything was wonderful. I started getting incredibly tired during the meal, having been awake for nearly 24 hours. I had a cup of coffee–and that is why I am blogging right now. I think Tom went to sleep, despite our talking about staying awake to get acclimated. I’d like to make it to at least five o’ clock, local time.

Tomorrow, more Rekjavik. I may look for sea glass, and we want to go to the National Museum and Culture House. I think we’re going to skip the Phallological Museum, though. And yes, it’s exactly what it sounds like.