We weren’t sure what we wanted to do today, so we asked Bergland, our hostess. She suggested a lava tube and mentioned a number of other places. I wanted to try the geothermal spa not too far from the cave.

We drove a fair distance inland, mostly on paved roads until about 10 miles before reaching the cave. We drove through lava fields covered in arctic moss, past newly-planted fir tree farms (there is an effort underway to reforest the island), and past meadows of soft grass and flowers.

This, according to PlantSnap, is “sulphur buckwheat.”

The entrance fee for the lava tube was astronomical, but oh well. They told us the temperature in the cave was below freezing. I zipped my raincoat liner back in, managing to foul the zipper, and put on gloves I purchased specially for this trip. They were made of padded neoprene, like diving gloves, and I figured they would keep my hands warm. I have a tendency to lose complete circulation in my fingers, which is never a good thing.

The view from the lava tube visitor center. This is hard to make out and very far away, but it is (I believe) Longjokull, a large glacier.

Our guide was a cheery young English geologist. He informed us that the volcanic eruption that formed the tube took place just prior to Viking occupation, and there had been archeological evidence that humans had lived in the cave not too long after the lava cooled. By this time, our breath was smoking in the air and forming minuscule ice crystals, so I asked why they didn’t freeze to death. He responded that the lava took a long time to cool completely, so the lava tube was probably still pretty toasty. (My words, not his.) 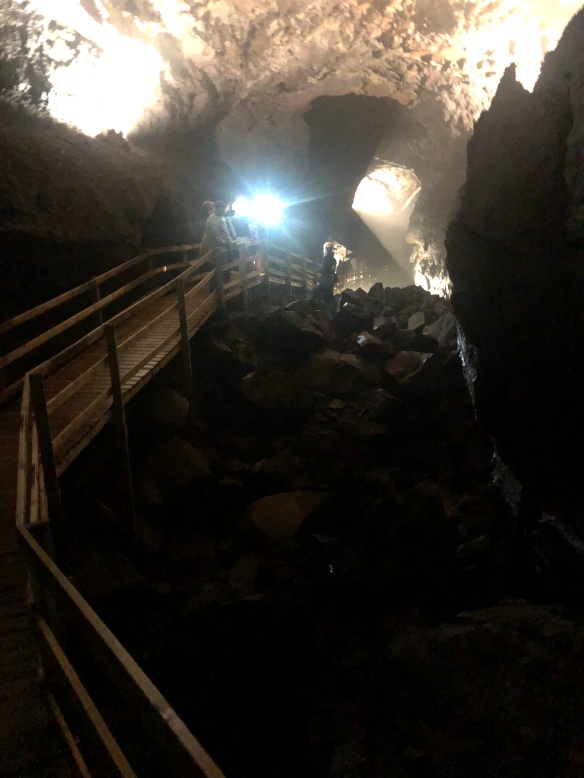 The stairs leading down from the cave entrance. There were more stairs going up, and a lot more going down.

After we descended countless wooden steps into the depths of the earth, we had to squeeze through a low-ceilinged, narrow passage where I realized why they made us wear helmets. I clocked my head several times, being tall. I really appreciated that helmet.

After that, there was a section of floor that consisted of loose, uneven scree. I had a really hard time with this–until I took off my glasses. In the dark on uneven ground, they interfered with my depth perception. After the glasses went into my pocket, things got better. 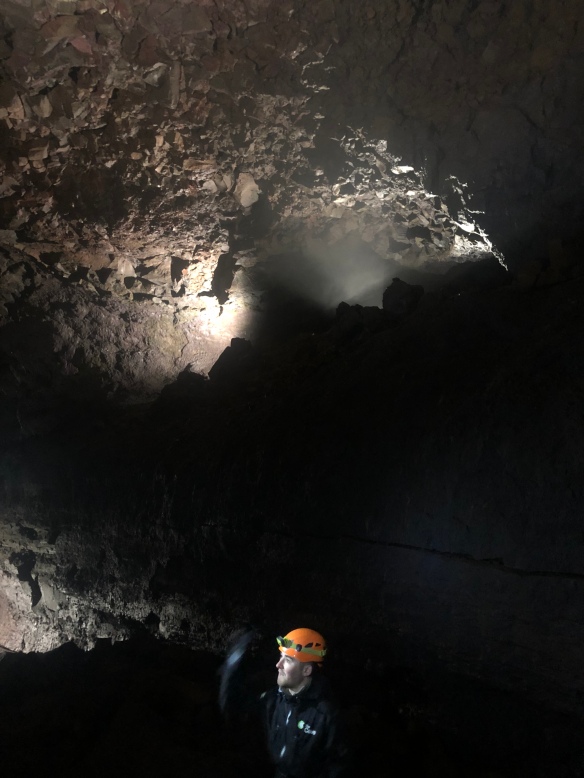 Our guide. I just liked the drama of this image.

Our guide showed us various things–a chamber with yellow rocks of sulphuric dioxide, a reddish chamber of iron oxide, and a chamber that looked like melting chocolate (more iron). Tiny stalagmites were forming. They’ll be impressive in a thousand years. Ice sparkled in pits on the floor and in the walls. Because it is a lava tube and formed only about 1100 years ago, it doesn’t feature the dramatic stalactites, stalagmites, curtains, pipe organs and other formations you might think of as typical for a cave. Those kinds of formations occur in limestone caves, but this was volcanic.

The “chocolate room.” In person, it looked more purple to me.

The cave goes on for another kilometer past where we stopped, but only researchers are allowed there. At this point, our guide asked if anyone was afraid of the dark. No one was–or at least, no one admitted to it. First, he explained about how dark it would be. Then he told us a creepy story about a spiritualist who, when the lights went out, claimed to see evil spirits crawling all over the walls. She kindly exorcized all but one, who must have been very stubborn. Then he turned the lights out (and we all turned off our helmet headlamps).

It was dark. But I could still see the faintest, most ethereal glow of light from the direction of the entrance, so it wasn’t total. Not that I would want to wander around in there in the dark. Our guide told us to wave our hands in front of our faces, and as dark as it was, we could see them, barely.

On the way out, the guide pointed out a troll. It was a “face” in the rock wall–a lumpy, misshapen face that had apparently terrified early inhabitants. I saw another face as wall, an even better one, but no mention was made of my troll.

Tom and I as we were exiting the tunnel. In this area, there had been a cave-in, exposing the tunnel to the sky.

I was happy to get back to the surface because my neoprene gloves had not kept my hands warm. They were freezing. But when I took my gloves off, my fingers were pink, not white, so I guess the gloves worked even if they didn’t feel like it.

The next stop was Krauma, a geothermal spa fed from Ok, Iceland’s most petite glacier. It’s kind of a fancy place for Iceland, which tends to be informal and makeshift in many ways.

Small geothermal geysers greet you at the entrance to Krauma. Also the smell of sulphur.

We didn’t meet any Icelanders (no surprise), but I did get to practice my French on a French tourist. She spoke English, I spoke French, and we helped each other with the words we couldn’t remember. OK, I am a geek, and this was fun.

We also ran into a group of women who go on worldwide mind/body/spirit tours together. They seemed a bunch of very fit, intelligent older women. And one of them was interested in my novels, so what’s not to love? They were having a session tomorrow at the full moon with an expert on the huldefolk (hidden people, elves, fairies) and invited me to come. I would have LOVED to, but we are moving on to Akurayri tomorrow.

The sculpture represents a volcano.