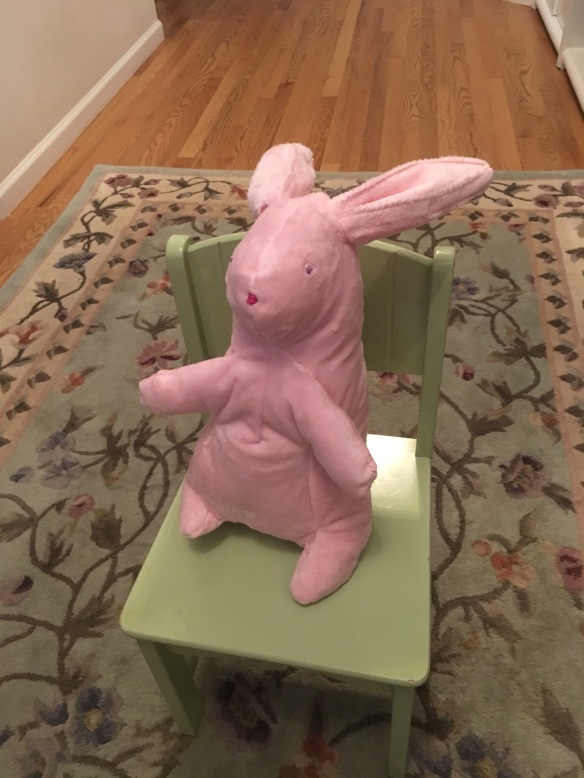 It’s been a lo-o-o-ng time since I blogged (March 22!). I could say that I’ve been busy, but that isn’t really true. I finished my third novel, “Lords of the Night,” the third book in my trilogy, in February. I sent it in to my publisher. My publisher informed me that they have decided to focus on non-fiction books. That leaves a fantasy writer right out in the cold. The good news: they will continue to stock and sell my books until I find a new publisher.

I decided to look for a literary agent. I’ve never had one, but I hope that an agent can secure a better deal—with more book promotion, ideally. So I am sending out pitches to agents. Fun.

But that doesn’t keep me busy enough to justify my failure to blog for almost three months. Well, there’s always the looking-after-the-grandkids excuse. Or the volunteering-for-voter-registration excuse. Or I could blame the pink bunny.

My youngest granddaughter, Jessamyn, thinks I am a master seamstress because I once sewed something together. The truth is that I am a person who owns a sewing machine. The machine, a sturdy old Kenmore, was once the property of someone who really knew how to sew, judging by all the bells and whistles I don’t use.

So one day Jessamyn asked me, “Nana, would you make me a pink bunny?”

I was stricken with terror. I had never made a stuffed animal before. I had no idea in the world how to make a stuffed animal, or even if patterns for such things existed. I was strictly a two-dimensional kind of gal. But I thought, “How hard could it really be?” Experience answered this question.

I went online, of course, searching for bunny patterns. It soon became apparent that there are tons of bunny patterns online. Some are even free, but I chose a pattern for sale on Etsy because it was modeled after “The Velveteen Rabbit,” a childhood favorite. I paid a small fee for the PDF download.

I then searched for suitable fabric online as well, and found an inexpensive remnant of light pink “minky” fabric, which is that impossibly soft and cuddly fabric used a lot these days in baby blankets. I also purchased crushed walnut shells for the weighting called for in the instructions. So far, so good. I settled in to wait for my purchases.

That was when Jessamyn, dear little creature that she is, began saying things like, “Have you given up on making my pink bunny, Nana?” Or “Is my pink bunny ready yet?” At five, I don’t expect her to understand that these things take time, but the heat was definitely on.

At the fabric store, there were many bolts of white netted stuff in various weights that were clearly marked “fusible,” but none were marked “interfacing.” I selected one of them, bought a half a yard, and carried it home.

By the time i realized that what I had purchased was not interfacing but actually adhesive designed to glue one fabric to another, my iron was covered with melted plastic. (Come on—I said I wasn’t very good at this, right?)

Okay. Clean iron (not very successfully). Back to the store. This time, I asked a sales associate to identify interfacing for me. Home again. Iron interfacing onto fabric. It didn’t stick very well, but I decided to plow onward regardless.

Laying out the pieces for cutting, I realized that the instructions had skipped a few steps. Because the PDF was downloaded and printed onto regular letter-size paper, the head and body had been split into smaller pieces that needed to be assembled, taped, and then used as the pattern. Not only did the instructions never mention this, the pattern pieces required for this operation were unlabeled. No worries, I figured it out. But then I had three unlabeled pieces that didn’t seem to fit anywhere. Plus, the main body piece didn’t have any paws, and none of the random unlabeled pieces fit as far as I could tell.

I contacted the creator/seller of the pattern to ask about this, but received no reply. So I improvised the paws myself. Then I cut out all the pieces, including the unlabeled ones.

Now that the tedious setup portion of the project was over (by this time I was at least three weeks into the bunny), I began to sew. I really think it would have been a lot easier if the instructions had been correct. For example, in making the ears, I was instructed to place two pieces “right side to right side.” No problem. Except when the ears were finished, the wrong side of the fabric showed along the sides. I got out the thread picker and picked all those tiny little stitches out and did it all over again. The parts of the interfacing that hadn’t stuck properly slipped and slid across the fabric, making sewing more difficult.

Have I mentioned that my husband would remark at least once a day that I should have purchased a white bunny and dyed it pink? Really, if I were going to succumb to defeat like that, I would buy a pink bunny and save some time.

Not that I wasn’t tempted. The pattern pieces fitted together awkwardly at best, and I did a lot more improvisation before I was done. There were still three unlabeled pieces that never fit anywhere. And there was also a lot of hand-sewing as I tried to make up for both my lack of expertise and the shortcomings of the pattern and instructions.

Despite the setbacks, yesterday I finished the pink bunny! The kids were out all day with their parents, so I set up the bunny on a child’s chair in the front hallway to greet Jessamyn on her return. I was waiting to see her expression when she came through the door.

She walked in, stared at the bunny, then ran past me, giggling hysterically. Her parents called her back and told her that it was the pink bunny that Nana had made for her. She picked it up and buried her little face in the soft pink fur, and slept with it last night.