We’re in Cordoba now, having spent three nights in Sevilla, during which I was too tired to post anything.

I slept quite late the first full day, which was a Sunday, so there wan’t much open in any case. We walked around, took some pictures, got rained on, had some tapas and tried to get oriented.

One of Sevilla’s tiny streets in the old Jewish Quarter

We actually didn’t do much in Seville except for walk. Our hotel was reasonably near the Alcazar and the cathedral–but we never made it inside the cathedral. We spent a lot of time walking through the narrow, winding streets of the old Jewish Quarter (pre-expulsion). The houses are four stories high, and in some places I could almost touch the houses to either side of the street with outstretched arms. Cars can access some (but not all) of these cobbled streets, and when a car came along, we stepped into a doorway or onto the narrow sidewalk, if there was one. In addition to negotiating the Medieval and Renaissance walking surfaces, we had to keep a sharp eye (and nose) out for horse and dog poop. There are a lot of horses and lovely carriages in the old city that tourists can hire for merely exorbitant prices.

While walking, we passed by an interesting-looking restaurant, Sagardi. It had a small foyer for tapas, and a restaurant in a large, enclosed atrium. We checked out the menu and decided to come back when we were hungry. We had dinner there, and it was every bit as wonderful as we had hoped. We vowed to return for tapas another time. 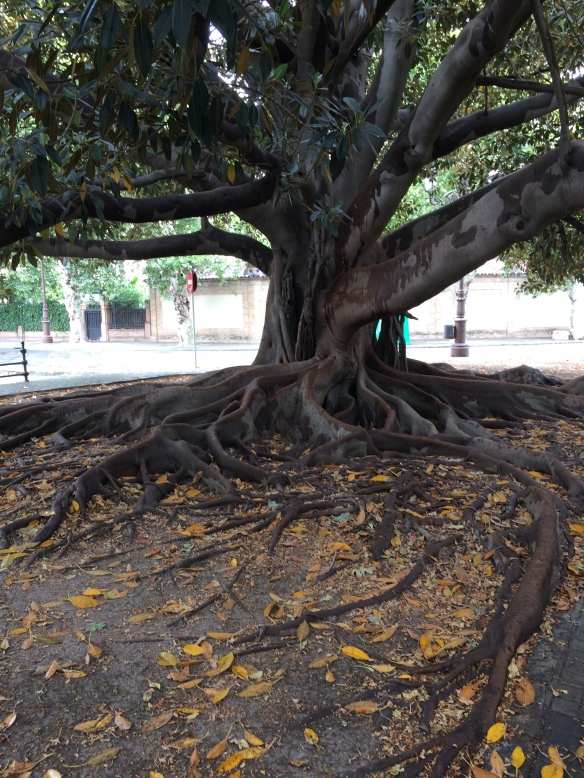 The hotel we stayed in, La Casa de Maestro Boutique, was an old house on one of the non-car-accessible streets, but we did get a parking spot nearby. The hotel has oodles of charm, but the room was small and the shower miniscule. Once in the shower, if I dropped my shampoo (inevitable, as there was very little place to put anything), it was nearly impossible to pick it up. However, the room was clean and the bed was comfortable, and that counts for a lot.

Driving in this part of Seville is madness for a tourist, so we walked to the Alcazar the second morning. Flamenco is very big in Sevilla, and there are stores selling very high-quality Flamenco-related goods such as fans, silk shawls, dresses, castenets, etc. (You can also get el cheapo versions of these in gift stores). My sister wanted a Spanish shawl, so I went into one of these upscale stores to find one. While there, I saw the most gorgeous shawl I have ever seen in my entire life, or hope to. I have extremely good (read “expensive”) tastes: it was the equivalent of $1500 US. It was love at first sight, but it will have to be a long-distance relationship.

Lusting in my heart for this shawl. All hand-embroidered in silk. Wouldn’t this be a lovely Christmas present for me? I thought so, too.

The Alcazar of Seville was build by King Pedro the Just or Pedro the Cruel, depending on whether you were one of the people (the Just) or an aristo or member of the clergy (the Cruel). Pedro really liked the Moorish style or architecture and ornamentation, and used it throughout his palace. It is fronted by a 12th-century gate, very rustic and antique-looking, considering the elegance lying just beyond. You walk into a vast plaza, flanked on three sides by different buildings. One is Pedro’s palace, one was the house of someone else important–the mayor of Seville?–done in a more traditional Spanish style, and one is another wing of the palace built by a later monarch who very much disapproved of Pedro’s taste in architecture, because it is a thoroughly Italianate Renaissance building. So it’s a rather odd mishmash. Pedro’s palace is rich in lacy Moorish stonework (even bearing the name of Allah in this most Christian palace), brilliant tile work, Moorish arches, carved, painted and gilded ceilings, and fountains. One room, the Ambassadors Hall, is completely tiled up to the ceiling, three stories up.

The Alcazar, showing Pedro’s palace to the left, and the important person’s house to the right.

Ceiling of the Ambassadors Hall, the Alcazar Seville

The Alcazar is the residence of Spain’s current king and queen when in Sevilla, but we had an impression that they don’t stay here much. Hard to imagine they would want to stay at a place that is overrun with tourists all the time. We bought tickets for the private royal chambers, which are upstairs, but I’d be willing to bet they have other, much more private chambers there for their actual use. These rooms reminded me of other palaces in other places, with many oil paintings of ladies in voluminous dresses and men in tight white pants, crystal chandeliers, gilded clocks, etc., etc. 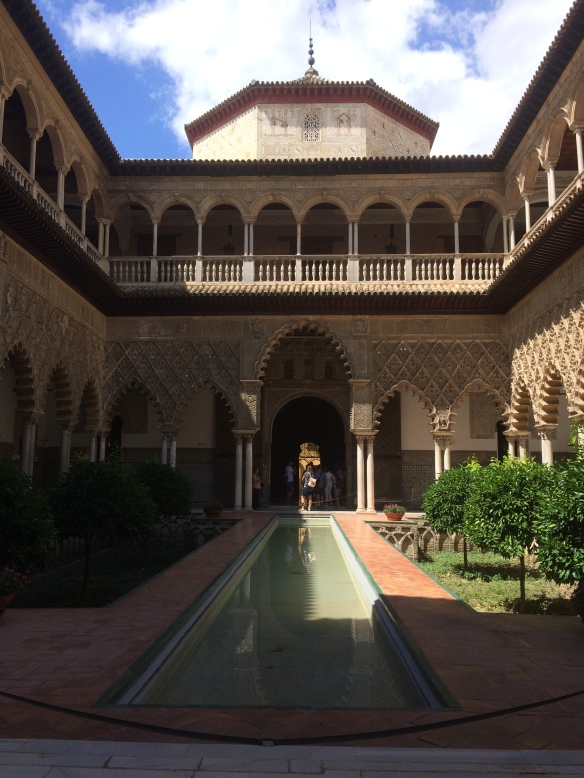 There are many lovely courtyards, reflecting pools and fountains throughout the palace, and the whole is surrounded by yet more gardens. It’s a gorgeous place, but I have to admit I was not as thrilled as I should have been because my feet hurt. A lot. I disappointed myself in my unwillingness to do more exploring, but there we have it. We found the cafeteria and had some wine and split a sandwich, then left. We found a horse and carriage next to the cathedral and got a ride back to the hotel, which I thoroughly enjoyed, largely because I wasn’t walking, but I do enjoy the clip-clop of horses and yes, the way they smell.

Gorgeous antique fan on display at the Alcazar

Later, we walked to Sagardi for tapas and wine. The tapas were delicious, but we decided to find another tapas place–it’s what people do in Sevilla. While wending our way through the tiny streets trying to find another tapas bar (a specific one; there were plenty of tapas bars. It made me wonder if anyone cooks at home in Sevilla.), I realized I had a blister. A quick trip to the pharmacy solved that problem, and we eventually found our tapas place, situated on a plaza across from City Hall. We had more excellent tapas, but by this time, we were both full. We did stop on the way back to the hotel for small ice creams, but this hardly counts. I feel like we should have gone to the cathedral–it’s the largest in Spain (that means very, very large)–but couldn’t work up enough enthusiasm.

Then it was early (for Spain) to bed, with Cordoba awaiting the next day. I mean, after we pick up our laundry, that is.