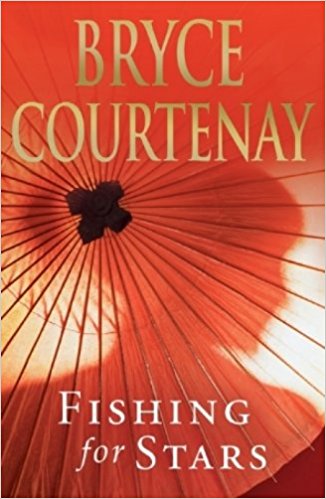 “The Persimmon Tree” is how I discovered writer Bruce Courtnay. Born in South Africa, he had a notable career in advertising before retiring, moving to Australia and becoming a highly successful novelist. “The Persimmon Tree” was a complete surprise to me. It is the story of a young boy, Nick Duncan, and Anna Till, his first love, and it opens at the beginning of the Japanese invasion of Indonesia in WWII.

Nick escapes on a sailboat that belonged to Anna’s father and after run-ins with the Japanese, winds up in Australia, now of combat age. He has an affair with an older woman, Marg Hamilton, fights at Guadalcanal with the Americans, and much later, rediscovers his lost Anna.

Anna’s story is weirder and more harrowing. She is forced to become a “comfort woman” by a high-ranking Japanese officer, Konoi Akira, forcibly addicted to heroin to keep her under control, and trained in the art of kinbaku, a ritualized form of rope bondage and sexual torture. This is why the officer wanted her—to perform kinbaku on him.

Long story short, Nick finds Anna (still addicted) running a kinbaku house in Australia, and decides to take her for a heroin-free cruise on her father’s former sailing ship, in an effort to help her go cold turkey. (Not Anna’s idea, by the way.) They sail into the sunset at the end of “The Persimmon Tree,” leaving us hopeful for their future.

Though I read this book years ago, it made a huge impression on me. It was tightly plotted and pulled me right through the story without a pause. I cared about the characters and rooted for Anna and Nick’s happy reunion.

I subsequently read Courtnay’s magnificent “Potato Factory” historical trilogy based on the life of Ikey Solomon, the model for Dickens’ Fagan character in “Oliver Twist,” plus several other tales. I enjoyed every one of them, even the last one he wrote, “Jack of Diamonds.” I didn’t think it was his best, but he was dying of stomach cancer while writing it, so I thought he deserved a pass.

Which made reading “Fishing for Stars” all the more dismaying. It is, in my opinion, a hot mess. Anna did not respond well to the amateur intervention and stays addicted. She has morphed into a skilled businesswoman with an insatiable appetite for more. Mostly more money, and she isn’t overly choosy how she makes it. She and Nick are lovers, but she won’t allow any touching below the waist as she suffers from vaginismus—a painful cramping of the vaginal muscles. She believes her power lies in preserving her virginity.

Nick admits to being completely satisfied by Anna’s sexual ministrations, but he chunters on ad nauseum about his “need to possess her fully” for YEARS. If I were Anna, I would have dumped him.

Marg Hamilton, the woman with whom he has an affair in his youth, reappears, newly widowed. After several years, she consents to sleep with him again. (I don’t know any men that patient. Do you?) Marg has become a green activist in direct opposition to most of Anna’s commercial activities. The two women call each other “the green bitch” and “Princess Plunder,” and settle down to really despising each other’s guts.

The third part of the book is about Marg and her conservation efforts. It is essentially a long and tedious history of the Green political movement in Tasmania and I almost gave up.

In the end, Marg screws Anna (metaphorically), and Anna screws Marg. Nick spends the whole book as a sort of pingpong ball being batted between these two women.

I have always admired Courtnay’s portrayals of women. They are always three-dimensional, strong portraits, contrasting dramatically with the way men often write female characters. However, the way Marg and Anna are written in “Fishing for Stars” turns them into two equally unpleasant viragos—an impression heightened by the narrator, Humphrey Bower. (I listened to the audiobook.) Bower—who is brilliant at accents, from southern Black American to Japanese­—plays Marg as an unusually sniffy school librarian, and Anna as a bitch.

In the final analysis, “Fishing for Stars” is a bad book by a good author, and a very disappointing finale to the characters I loved in “The Persimmon Tree.” I strongly encourage you to read Courtnay’s other work, in particular “The Persimmon Tree,” “The Potato Factory Trilogy,” and “Brother Fish.” You won’t be disappointed.