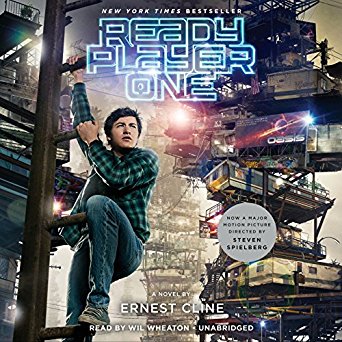 Are you a gamer? Did you play video games obsessively as a teenager, and still sneak in a few games now and then? Are you conversant with pop culture in the 1980s and can name all the characters from “Family Ties”?

Even if you aren’t, you will probably enjoy “Ready Player One.” I can’t remember anything about the 1980s because I was raising small children and starting and running a company—and I still enjoyed it. Our hero is a teenaged boy named Wade. Wade’s life sucks. He lives in a not-too-distant dystopian future with his aunt because his parents are dead. They live with several other people in a house trailer on the top rack of “the stacks.” People have moved to the city hoping to find jobs and food, and space is at a premium. So house trailers are piled one on top of the other in racks that can be many trailers deep, like a rickety multi-story apartment building. Wade’s aunt takes his food rations and gives him nothing, so he has learned to scrounge and deal and make his own way in the world.

Wade’s great obsession in life is the Oasis. The Oasis is a massively complex, totally immersive artificial reality environment reminiscent of Second Life, but eons beyond. Playing is free, but users must have equipment to access the Oasis and create game avatars. All the things an avatar might use, such as magical objects or weapons, cost actual money, as does transportation within the Oasis. Half of humanity spends a significant percentage of their lives in the Oasis because reality has become so unpleasant.

Wade can access the Oasis because he has haptic gloves and a controller through the free school he attends within the Oasis. But he can’t explore the Oasis much because he can’t pay for magical tools and technology (both work within the Oasis) or pay for transportation, so his avatar has only made it to Level Three. This is a huge problem for Wade, because he wants to find the Easter Egg, which requires serious player chops.

The Easter Egg was the brainchild of the Oasis’ original creator, James Halliday. When Halliday died, his will specified that whoever won the treasure hunt he had set up within the Oasis would inherit the Oasis and his multi-multi-billion-dollar estate. Although it has been years since Halliday died, no one has yet found even the first key. Wade, like hundreds of thousands of other “gunters” (egg-hunters), desperately wants to find the egg and win the game. The trouble is, so does IOI Corporation, which has recruited hundreds of people to look for the egg and equipped their avatars with the top-of-the-line haptic equipment, tanks, guns, magic, etc., etc. far beyond the means of a mere gunter.

Wade has spent his entire life studying James Halliday and his obsession with 1980s video games and pop culture. He finally figures out where the first key can be found—and also figures out how to wangle free transportation to the location. He finds and uses the first key, and his life morphs out of all recognition. IOI makes him a generous offer to come work for them. But if Wade finds the Easter Egg, IOI gets the goodies, and Wade knows IOI will make the Oasis into a pay-for-play experience, so he refuses. IOI immediately detonates a bomb, blowing up the stacks where Wade’s aunt lives, killing her and many other people. Wade, who wasn’t home at the time, now has funds gained from solving the first puzzle, so he assumes a false identity and goes underground.

So the game-within-a-game has suddenly become literal mortal combat. Aided by the few friends he possesses, Aech, Art3mis, Shoto and Daito (none of whom he has met in reality), Wade continues the quest.

Wade’s encyclopedic knowledge of old video games and the 1980s assists him through the challenge until it comes to the third and final key. By this time, IOI employee avatars are ahead of him in the game. IOI hit men are searching for him and his friends in the real world. Wade sets up a sting operation. If it works, he and his friends have a good chance of making it to the egg. If it fails, he becomes a lifelong slave of IOI Corporation.

Cline has created a complex world, both within the Oasis and in the real world. It probably adds to your enjoyment if you are familiar with the video games that are mentioned in the story, but even without that knowledge, it’s a tightly plotted and well-paced tale. Also—and this is important—it’s a fun story. Great drama has its place. Tragedy has its place. Interpersonal relationships and their tangled webs have their place. But fun stories are important too, and I found my real-world burdens and anxieties dropping away as I followed Wade and his friends through their half-real, half-simulated adventures. I highly recommend “Ready Player One” as a respite—an Oasis if you will—from the all-too-angst-producing reality of our own world.