So today’s theme was stairs. I am no stranger to stairs. Our house has 32 steps from the driveway to the front door, and then another flight of stairs if you want to get to the second floor.

But my house stairs to the Alhambra is as Barbie’s Dream House to Versailles. This place has staircases everywhere, and not an elevator in sight. Our room is romantically located in a small square tower overlooking the gardens. It isn’t next to, above or below anyone else’s room. It can only be reached by four flights of stairs and an additional steep staircase to the bedroom. We traverse this mountain several times a day–and if we want to go to the restaurant, there’s yet another flight.

Another note about stairs here; the steps are higher than I am accustomed to. That seems odd to me. Presumably back in the day, people were shorter. I am tall and have long legs, but I ascend carefully because the steps are so high I am afraid of tripping.

We visited the  Nazaries Palace at the Alhambra today. We had a little time to kill first, so we went into the Charles V palace, which houses an art museum–up a steep flight of the slipperiest marble steps I have ever encountered. Coming down, even Tom was clinging to the railing and complaining about feeling old.

The palace itself had so many stairways I couldn’t count them. However, the beauty of the place is so magical that I barely noticed. There is delicate, intricate stone bas-relief carving everywhere, so fine it looks like lace, transcending the solidity and weight of the material. Inlaid tile murals in geometric patterns, like jewels. Tall, slender columns, reflecting pools, fountains, trees, flowers, vistas of the town through stone traceries. There are places in the ceilings where you can see that the carvings were once brilliantly colored and accented with gold leaf–it must have engendered deep awe and amazement in its heyday. It still does today.

Ceiling detail, Nazaries Palace. You can see it was once painted. 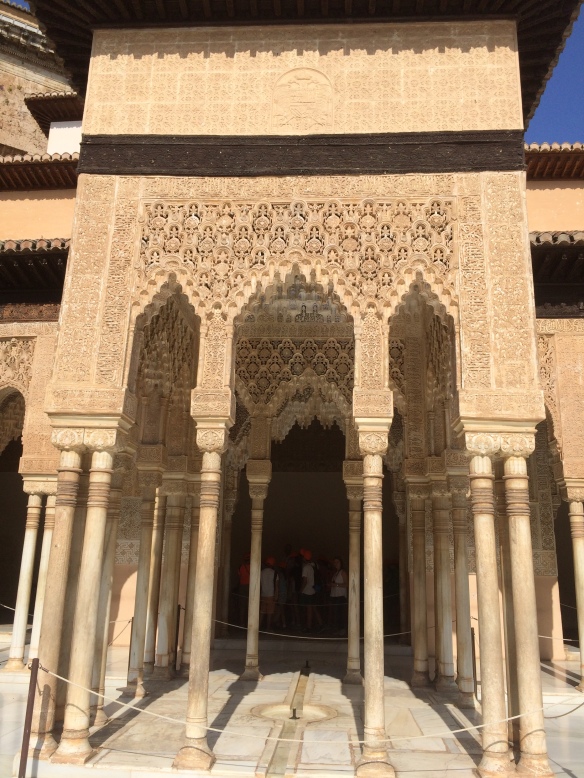 After taking a brief rest, we decided to visit the Generalife, another palace with tiered gardens–and even more stairs. The path to the Generalife led past ruined Moorish palaces where the walls are now just stacks of bricks, sometimes faced with stone. Then through the first tier of gardens, overlooking the Nazaries Palace at the Alhambra. The Generalife palace is not in as good a condition as the Nazaries Palace, but still boasts some stone traceries, and there is running water everywhere, flowing down canals and channels–in one place, it runs down the balustrades of a long. long staircase that ascends to the top of the hill. The gardens are gorgeous and well-tended, and the peaceful sound of running water is soothing to the ear. Everywhere around the Alhambra complex, clouds of sharp-winged swallows swoop in and out of holes in the ancient walls where the mortar has fallen away, tending to their babies. 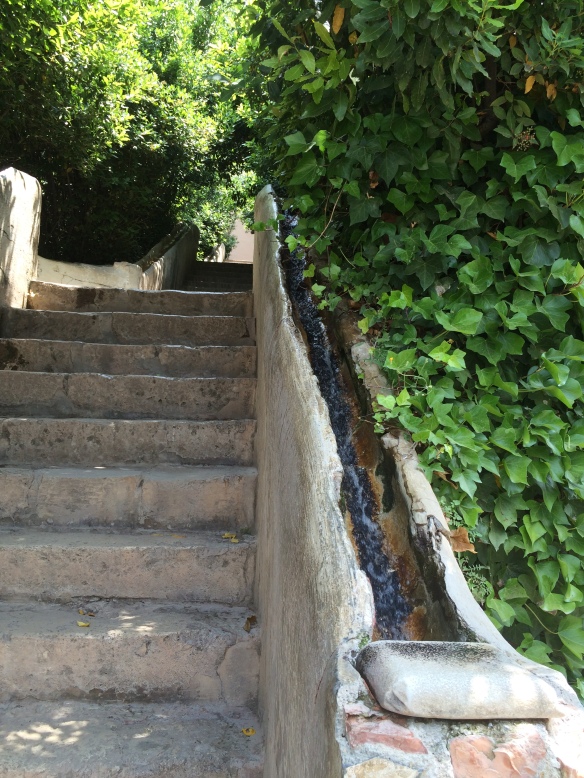 The restaurant at the parador is OK, but not inspired, so we decided to get wine and tapas at the Hotel America, just a few hundred feet away. The hotel has an open-air patio, and we sat in a shady corner. There was netting overhead, but it was covered with vines and detritus. The sparrows are numerous and aggressive. They clustered directly overhead, shuffling and muttering, and we sat in a near-continuous rain of sparrow poop and dried leaves, which we picked out of each other’s hair. You might well ask, “Why didn’t we just move?” The answer is that everyone there was having more or less the same problem, so there was no point. The food was good, but I do not believe we will be returning. I had to wash my clothes and travel purse when we returned to our room. We had rather more wine than we had originally intended, but what the hey, we were on foot. I found the five flights of stairs to the bedroom a bit of a trial, though.

After a short four-hour nap, we drove into the town for dinner. We were about half an hour late because the streets in the old town are so narrow and windy. Plus, our GPS app was even more confused than we were. We finally found the general neighborhood and parked in a parking garage that said “Parking Publico Libre”–but it wasn’t. The parking garage was even more harrowing than the streets, but we finally found a spot and (eventually) the restaurant, La Bottilleria. The food was excellent and so was the wine. So was the service, for that matter–not something you can count on here. We found our way back to the parking garage and Tom valiantly tried to drive out of it and got stuck. He went to find the attendant to help (a most unusual move on Tom’s part), and the helpful attendant rescued us. Then we just had to negotiate the tiny, winding streets back to the Parador, and up the four flights to our room. (I haven’t made it to the bedroom yet. One. More. Flight. To. Go.)

I may not lose weight on this trip, but I sure as hell will be gaining muscle tone.