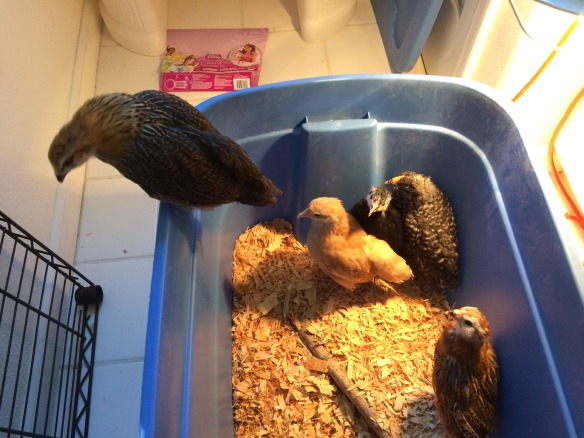 Four years ago, my husband and I and our daughter’s family bought a house together and moved in. We had a nice big yard, and Kerry (our daughter) decided we should have backyard chickens.

I wasn’t opposed to having backyard chickens, as long as there were no roosters, and superannuated hens would be comfortably retired instead of popped in a stew pot. I did not grow up on a farm. I am unabashedly sentimental about animals. Yes, I know where my food comes from. No, I am not going to start killing my food unless the P45 administration sends us all back to the Stone Age and I somehow miraculously survive. And I most definitely will not kill something that has a name and has trusted me. (I hated the episode on the PBS reality show “Frontier House” where one of the dads shoots a pig named JoJo and makes his son watch—the son who had raised and loved the pig.)

There was a delay in the acquisition of actual chickens. Kerry bought a chicken coop (some assembly required), but she got pregnant almost immediately. The next three years were chicken-free. But the new baby inexorably became a toddler, and the toddler is rapidly becoming a little girl, so the topic of chickens resurfaced. Kerry and her eldest child went to a daylong seminar on raising backyard chickens and returned home with a box of five fluffy baby chicks of assorted breeds.

You have to keep chicks protected and warm, and in any case, we didn’t yet have a chicken coop. So they wound up in a plastic brooder in the upstairs bathroom, warmed by a heat lamp. The bottom of the brooder is covered with a layer of wood shavings that drift everywhere—the floor, the sink, counter top, the toilet, the guestroom carpet. My shoes.

So there we were with five baby chicks. They ate voraciously, pooped abundantly, and appeared to grow before our very eyes. A scant four weeks ago they were downy little peepers. Today they are half-grown, with their feathers grown in and nascent combs. The brooder is getting a tad crowded in my opinion, but they don’t seem to mind. They were christened Ruby, Chix, Zippy, Sunny, and Henrietta. Henrietta is my contribution to the naming. She is the largest, calmest and (Kerry swears) the most intelligent of the lot. Kerry says Henrietta is the Boss Bitch of the flock. I am desperately hoping that Henrietta doesn’t turn out to be Henry. But not to worry; Kerry has located a rooster rescue organization. Who knew?

Kerry, being a force of nature, soon had her husband Mike working on a larger chicken coop because it turned out the previously purchased poultry palace was too small for five birds. Neither Kerry nor Mike had any carpentry experience, but they were undeterred. Armed with a borrowed circular saw, they began construction. Their friends (the ones who owned the saw) pitched in, and within a few days, they had most of the coop constructed, painted and reinforced against predators. It isn’t quite finished yet, but looks very professional. 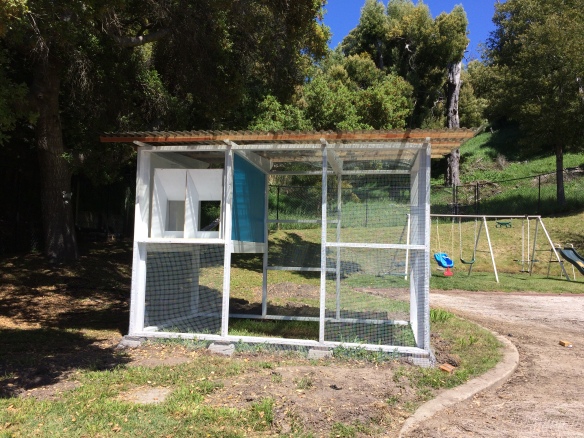 Predators are a real threat in our neighborhood, at least to chickens, and cats and small dogs occasionally go missing as well. We have a fenced yard, which should keep out the coyotes, but it won’t keep out raccoons, weasels, gray foxes (gray foxes can climb and we have seen them in the yard), rats, bobcats, or mountain lions. Yes, mountain lions. There’s one that lives somewhere behind us. We know because a neighbor saw it early one morning, and another neighbor ran across a deer carcass the lion had killed.

Then spring break came along, and Kerry and family have departed for a week, leaving me home as chicken curator. Someone has to check on them at least three times a day. Despite the fact they see humans so frequently, the same thing happens every time. As I approach the bathroom door, it is quiet inside, but as soon as I touch the door, a chorus of anguished chirping starts up. When I enter the bathroom, the chirping becomes louder and more intense as all the chicks huddle into one corner.

Our chickens do not, as Chilean poet Pablo Neruda once wrote, “… look at us with dry eyes as though we were unimportant.” No. They look at me the way teenagers in a horror flick look at the chainsaw-wielding mass murderer who chases them around the haunted house they were stupid enough to explore. As I move them from their brooder to the bathtub, the chickens shriek and flap and run away. When I succeed in catching one of them, always holding it gently in two hands, the screaming is bloodcurdling. The captured one shrills to her companions that she is being murdered! MURDERED! And the others increase their despairing screeches until I have rounded up every one and carefully deposited them in the tub so I can clean up their current mess without panicky chickens running around the bathroom floor as I work. 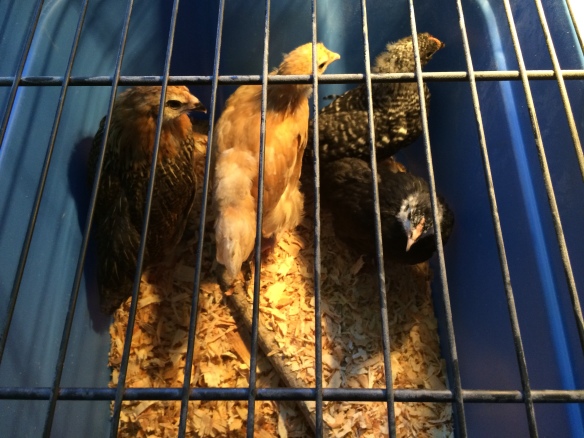 They all crowd together in the brooder when I enter the bathroom.

I have to clean out the water dispenser every time. Once they got big enough, the chicks started perching on top of the dispenser, which would topple over, letting all the water drain out. Although I have found a way to prevent it from falling over (packing tape), the chicks pile shavings on top of the drinking area and the shavings wick away all the water. So every chick-check is accompanied by some form of cleaning and disposal of wet shavings, even if I don’t have to move them to the bathtub.

While they wait in the tub, the chickens poop. Everywhere. In huge quantities. Then they step in the poop and leave chicken-foot-shaped poop marks all over the tub. Once I set their living quarters to rights and restore the chickens to their brooder, I have to clean the tub. As I sluice water in the tub, the chicks loudly discuss their ghastly experience with each other. I recognize complaining when I hear it.

Kerry tells me they can finish the coop with one more day’s work. Of course, I will have to wait until the family returns home. I am breathless with anticipation.