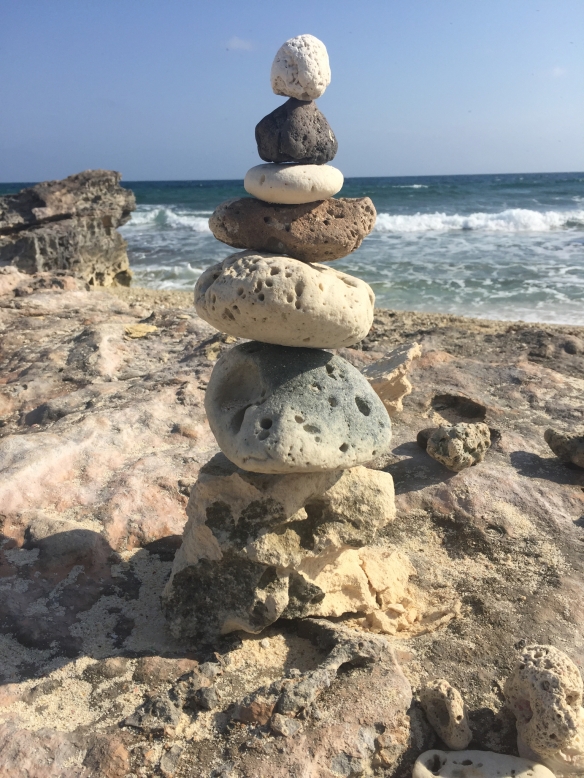 The Caribbean shore of Isla Mujeres, with embellishment.

This morning, I was determined to do some beachcombing. Everyone says there is sea glass here. But first we had breakfast at Lola Valentina, where the staff now knows us and the food is good. They have a small army of cats in the restaurant, black and white, orange tabby, and cream. They aren’t feral, exactly, but they aren’t pets. I suspect they are there not to cage crumbs from the tourists, but to keep the rodent and cucaracha populations under control.

Then we took No. 8., our putt-putt cart, over to the north shore. It is rocky all along the Caribbean side. There are no beaches and the currents are too strong for swimming. The waves are small, just a constant slap-slap-slap against the rough rocks.

Sadly, what we mostly found was plastic garbage. We did find some sea glass, but nothing that a sea glass enthusiast would get excited about. Mostly of the broken beer bottle variety but there were a few nice pieces. And we found a sad, dead cow fish. But mostly plastic garbage, which you see everywhere on this island. Every day, I saw people finish food and just walk away, leaving their refuse on the street.

The bridge to Mia Reef

After that, we went to Mia Reef, which is a resort built, natch, on top of a reef. As a consequence, the reef is now dead. It is reached by a narrow wooden bridge across a beautiful turquoise inlet. For a fee, non-residents can get all the food and drink they want (including alcohol), and hang out on the beach or at the pool. There is still reef, accessible from the beach, and the water is quite shallow all the way out to it. We didn’t snorkel because it was windy, but one man who was snorkeling said there was a lot to see. We swam in the aqua water and lazed on a swinging mattress under a palapa, looking out on the Caribbean. Mia Reef would be an ideal place to take kids because the water is crystalline, shallow and calm. Once older kids are used to the water, the reef would be an excellent introduction to snorkeling. The resort is elegant and clean, there’s a kids’ club, and the staff is attentive even to day trippers such as ourselves. The food was acceptable, the drinks not overly alcoholic, if you know what I mean.

We walked out on a long pier. There were two people snorkeling, and they said they saw a lot of fish. I decided not to try because of the wind and because we were scheduled for a snorkeling tour the next day, but I later regretted my decision to give it a pass.

As the following day was our next-to-last day on the island, we checked the flight times and discovered that we weren’t going to make our flight if we stayed on the island for the last day we were booked. We would have to go back to the Marriott Courtyard at the airport, which meant we had to check out the afternoon prior to our flight instead of staying on Isla. This was the same day we had scheduled the snorkeling tour, which bothered me because once you’re on one of these tours, you don’t just decide it’s gone on too long; you’re there for the duration. We had to turn in No. 8 by 4 pm and make sure we caught the ferry to the mainland in time. So I cancelled the trip again.

We’d already seen most of the things there are to see on this small island. There were only two things left, so we decided to do them.

Green sea turtle at the Tortugranja

We started at Garrifon Reef Park to do some snorkeling. It was more expensive than Mia Reef, but it is a kind of family playground with zip lines over the water, snorkeling, kayaking, a shallow, wandering pool with waterfalls and grottoes, beaches, restaurants and bars. Food, drinks and all activities were included in the price of admission.

Tom and I went snorkeling, but it was a disappointment to me. They make you wear a life jacket, which annoys me because it makes it hard to swim. The reef is dead, but they won’t let you snorkel over it anyway. We saw some fish and I saw a stingray. Tom saw a very large fish that he thought at first was a barracuda, but it was too chunky for that. He’d recognize a shark, so we never figured it out. My snorkel mask, which is one of the new kind that have a non-fogging bubble and built-in snorkel, was apparently too large, and I had to snorkel with my mouth hanging open to prevent water from entering. There was a line of people waiting at the steps to get into the water, and none of them would budge to let us out. A kindly man eventually took my equipment to allow me to climb out, which was nice of him.

We had the cafeteria food they were serving for lunch, accompanied by a non-stop stream of pretty-much-non-alcoholic margueritas that we didn’t ask for, which was fine. Sort of like lime slurpees, but better. Again, this would be a terrific place to bring kids. I’m just spoiled because I have snorkeled in places like Hawaii and Tahiti, where the reefs are alive and the ocean life abundant. I think I’m done trying to snorkel in the Caribbean. I’ve snorkeled in Antigua (actually OK at the time; early 70s), Jamaica and now Isla Mujeres, and most of the reefs I’ve seen are dead.

This was our last night on the island, so we made reservations for the fancy restaurant at Villa Rolandi. I had a filet mignon with bearnaise sauce that was as tender as chicken (I mean well-prepared chicken) and flavor to die for. It’s a great place, but at $400US a night it’s pretty pricey, even if all meals and drinks and activities are inclusive.

The following day we had breakfast at Mango Cafe–poblano pepper stuffed with bacon, eggs, onions and cheese, breaded and deep-fried. OK not healthy, but I’m on vacation dammit. We’ve pretty much done everything there is to do here, so we visited the Tortugranja, a rescue and breeding facility for sea turtles. They provide a safe place to lay and hatch the eggs, then release the babies. They have tanks with some older turtles being rehabbed, and there are some very large specimens in a pen in the ocean. You can walk along a pier to see them. They sell bags of turtle chow at the entrance.

There’s a large pen that extends into the ocean containing several large turtles. I think they are mature adults that for whatever reason will not survive in the wild. When you throw turtle chow in the large pen the turtles get some of it, but there is an army of assorted seagulls above and another one of little fish below that eagerly gobble up much of the food. 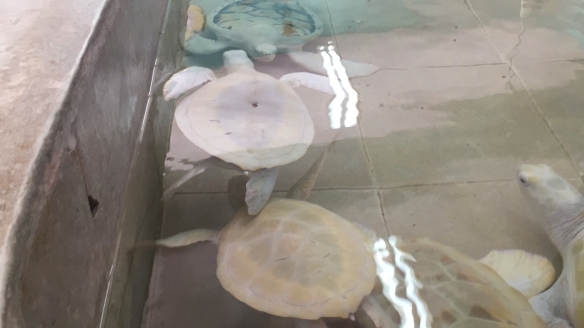 They had several albino turtles–one tank had nothing but albinos–and had green, hawksbill and loggerhead turtles there. Sea turtles are threatened for several reasons. One is because they are so darned delicious. People everywhere catch and eat them and their eggs despite the fact they are endangered. Another is because many of their hatching beaches have disappeared, taken over by development and humans who enjoy the beach environment. Another is because given their diminished numbers, the natural predation on the babies cuts seriously into their surviving numbers. Baby turtles must crawl from their nests in the sand to the ocean, all the while being attacked by birds. Once in the water, the babies are an easy snack for fish and more birds.

After the Tortugranja, we were pretty much done with Isla. We went into town, bought some gifts, had lunch and turned in No. 8. Then it was time to pack and catch the ferry to the mainland. On the taxi ride from Puerto Juarez, the ferry port on the mainland, the driver told me he had saved up to take his family to DisneyWorld in Florida, spending $750US for visas. The visas were cancelled by the P45 administration, no explanations offered. I apologized for my country, embarrassed. This was the first time anyone in Mexico raised the subject; of course they rely on tourism, but I also think they gave us, as individuals, the benefit of the doubt. Plus, the Mexican people are for the most part friendly, kind and polite. Many times, someone stopped unasked and helped me with something–a dropped item, a suitcase, or helped me over rough ground. On the ferry, which was crowded, a man gave me his seat with his family despite my protests. The Mexicans absolutely do not deserve the cold shoulder they are getting from my country.

I was pleased throughout our trip to note that there were as many Mexicans as other nationalities on vacation in the places we went, enjoying the sights and experiences of their country. (Calakmul was an exception. Most people there were American or European. It’s a kind of remote place, after all, and not someplace you’d take kids.) I have visited Mexico a few times before and didn’t see this previously. I am hopeful this means the middle class is growing in Mexico, and more people have the leisure and money that we have taken for granted here for many decades. I believe there were more Mexican tourists in Isla Mujeres than Americans.

At some point during the trip, Linda asked me if I had enough material for the next novel. I am beginning to work on a story line, but I would say no, I do not. I came back from Moloka‘i two years ago seething with ideas and enthusiasm to start writing. I’m not there yet with this one. I think it will be a slow burn. This one has to be the best one, because after that, I am saying farewell to Sierra and Chaco, Clancy, Fred, Rose, Kaylee and Mama Labadie. Three books are enough.

Next research trip: Iceland, but not for a while. I still have to launch “Fire in the Ocean” and write the third book in the series. But I’m thinking about it!

Here are some photos, included in no particular order, but I like them for one reason or another and they didn’t fit into my narrative:

A typical Mayan arch at Uxmal 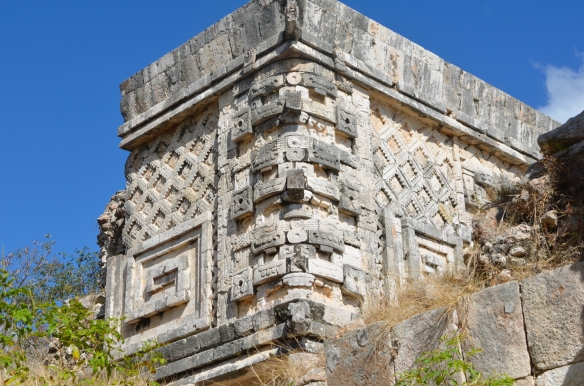 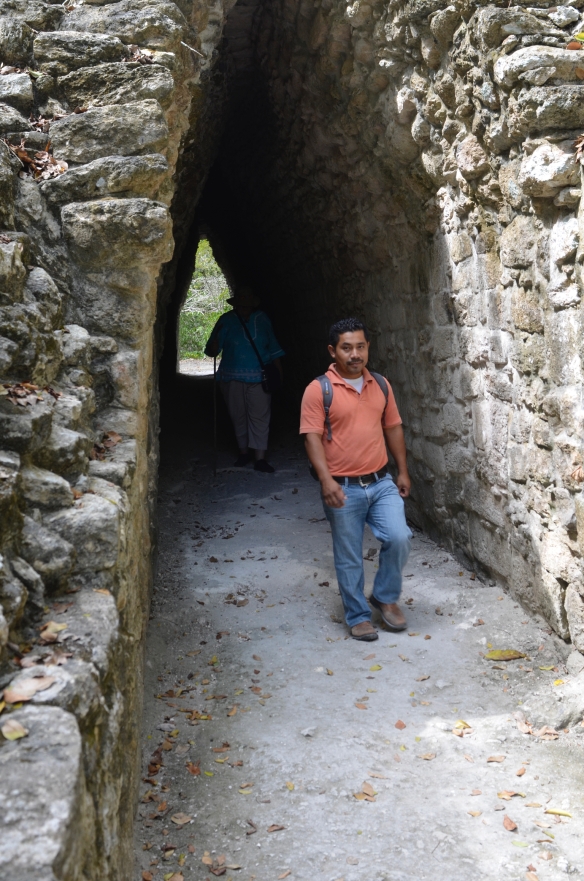 Our guide Roberto, standing in front of an arched tunnel at Becan. Air funneled through this tunnel and it was as good as air conditioning in the heat and humidity of southern Yucatan. 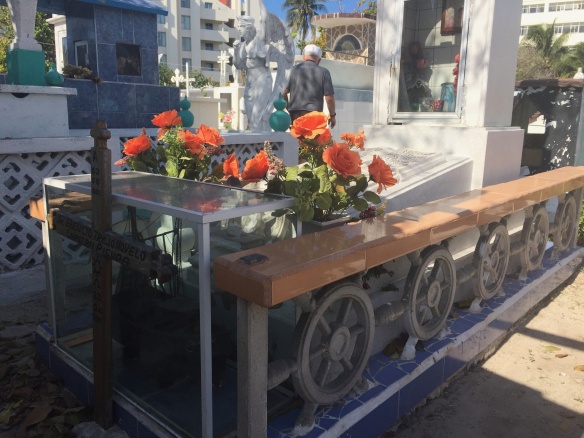 Another captain’s tomb at Isla Mujeres. You can see the ship’s wheels in cement in the surrounding fence What you can’t see as well is the model of a ship in the glass case at the front. 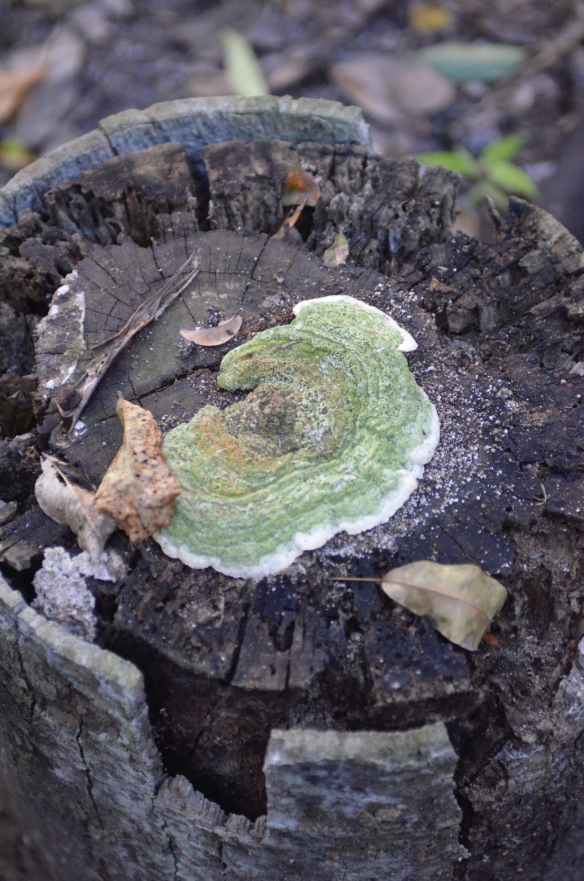 Strangler figs (isn’t that a wonderfully ominous name?) growing on an unexcavated building in Calakmul.