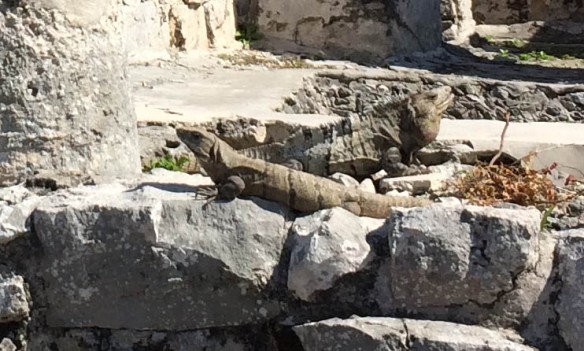 In the remote eventuality that anyone was disappointed that I haven’t been blogging about my research trip to the Yucatán Peninsula, I apologize. We were often in areas where the Internet service couldn’t handle large files, and I wanted to be able to post photos and videos, so I decided to wait.

Why Yucatán, you may ask? Well, for reasons I can’t reveal, the third book in the series that began with “The Obsidian Mirror” has to take place in Yucatán. The second book, “Fire in the Ocean,” will be out later this year from Diversion Books, and all will be explained. Well, some of it, anyway.

We made our way to Tulum on the Mayan Riviera without much problem. Our rental condo is located in a large tract of land not too far from the beach, called Aldea Zama. Aledea means village in Spanish and Zama is the Quiché (Mayan) word for dawn. It is also the original name for the Mayan city in the area, which is why we are here.

We ate dinner in a very good Argentinian restaurant, came back to the condo and fell into bed.

The next morning, we woke late, as it is East Coast time here, we’re from the West Coast, and we were tired. Breakfast, continuing the international theme, was crepes. We asked the waiter how far it was to walk to the ruins. He told us to walk straight down the road we were on for about four kilometers. So off we went. And continued for a long way, walking in the late morning heat and sunshine. We didn’t have a lot of water with us, and I didn’t realize it, but I was becoming dehydrated.

About three miles or so down the road there was an entrance to the beach and my husband Tom headed off across the sand, intending to walk the rest of the way on the beach. By this time, my enthusiasm had flagged, although I did appreciate the white sand, fine as sugar, and the brilliant turquoise and indigo of the ocean. Linda asked a woman how far it was, and we learned to our surprise that not only had we been directed down the wrong road, we were many miles from our destination because there was no access to the ruins from the road we were on or the beach.

We flagged down one of the passing taxis which took us to the ruins, all of us thankful we hadn’t tried to walk it. The entrance to the ruins is reached on foot or by a little tram pulled by an old tractor, and to my relief we took the tram. Before we embarked for the ruins, we saw a performance by a team of voladores. Four men climbed to the top of a 40-foot pole, playing instruments and dressed in colorful costumes. Once they reached the platform at the top of the pole, they wound ropes around the pole. Then a fifth man climbed the pole and seated himself, playing the flute as the other four men looped ropes around their legs, turned upside down, and spiraled down the pole as the ropes unwound from the pole. Wikipedia says this is a very old tradition, starting with the ancient Maya. It has deep cultural significance, and to prevent the tradition from dying out, Mexico started a school to teach children how to become voladores (females need not apply).

There is a large outdoor market around the ruins, but we went straight on without looking at the amazing array of goods, ranging from Los Luchos masks to delicately woven hammocks that looked like lace.

When we got to the ticket line, I wasn’t feeling too well, so I sat down on a bench near the front of the line. Along came a coatimundi–a relative of the raccoon that looks sort of lemur-like. She plopped herself down right among the tourists’ feet, rolled over and proceeded to give herself a bath, licking delicately at armpits and tummy. A man standing right next to her leaned down and tried to pet her. Tourists feed coatis all the time at Tulum, so assuming the man had food, the coati lunged at his fingers. Startled, the man jerked back and dropped his bottle of beer, which smashed on the stone flooring. The coati promptly began licking up the beer as the man cleaned up the glass. When last seen, the coati was cuddling in a woman’s skirt and continuing her bath, drunk and happy.

By this time, I was beginning to wonder what was wrong with me. I felt utterly drained and frankly not very interested in touring the ruins. This is completely out of character for me, as I am interested in ancient Mayan culture and had come all the way from California just to see them. But I had no energy and was beginning to feel odd; I was getting chills despite the heat and felt slightly nauseous. I rested for a while in the shade, but the water was gone. There was no place to buy water inside the ruins. I dragged myself around the ruins anyway. I probably took more photos of the iguanas at the park than the ruins. Often, they lay sunning themselves in pairs like tiny prehistoric monsters; Mr.and Mrs. Iguana taking a sunbath. There were black iguanas, green iguanas, gray iguanas, and youngsters with stripes streaking around while the adults sunned. I finally found a place to sit and look at the ocean–narrowly missing stepping on an iguana–and stayed there until the rest of the party found me. Then all I wanted to do was leave. On the walk back to the tram I developed an aura, like the kind you get when a migraine is starting. My hips hurt in a way I have never experienced before, and I felt generally horrible.

There has to be an iguana in this photo somewhere.

Tom got me a huge bottle of water, and after drinking a good bit of it, the aura went away. When we got to the open-air market, Linda saw a Starbucks and wanted iced tea. I noticed a vendor with adorably embroidered children’s dresses. He wanted $25 each. I wanted to get out of there and was not interested in bargaining, so I said no thanks and walked away. By the time I got out of earshot, he was down to $5 each, but I just didn’t care. This is also totally weird for me, because I adore haggling.

We took a taxi back to the condo. By the time we got back, I felt a great deal better, had a cold shower and took a nap. Lesson learned: take lots of water!

Despite getting dehydrated, I enjoyed the day. I’m looking forward to the rest of the trip, and will be much more cautious about staying hydrated.