Tom and I arrived home safely after a very long travel day. After decompressing a little (we went to see “the Book of Mormon” on our first night back), I now feel ready to tackle the inside of La Sagrada Familia, Antoni Gaudi’s masterpiece in Barcelona. As it happens, this post is a lot shorter than I thought it would be because–embarrassingly, for a writer–words failed me.

While the exterior is amazing, intricate and fascinating, the inside is simply indescribable. I can’t imagine why none of the art history courses I took ever showed a photo of the interior. I’m not going to provide the statistics on how big it is, because the numbers could not possibly begin to inform as to the size, scope and vastness of this space.

The east side of the nave has stained glass windows in blues and greens, while the west side windows are in oranges, yellows and reds. We were there in the afternoon, so the light was pouring through the west windows. The stained glass is laid in abstract patterns, not representational images, but the effect of the light was magical. It lit the cathedral in a way that cannot be described with words, and the photos don’t do it justice. The light is both ethereal and dynamic, with an energy that is alive and uplifting. I would like to see the east side in the morning to experience the effect of the light streaming through the cool-colored windows.

Standing on the west side of the nave, looking east, La Sagrada Familia 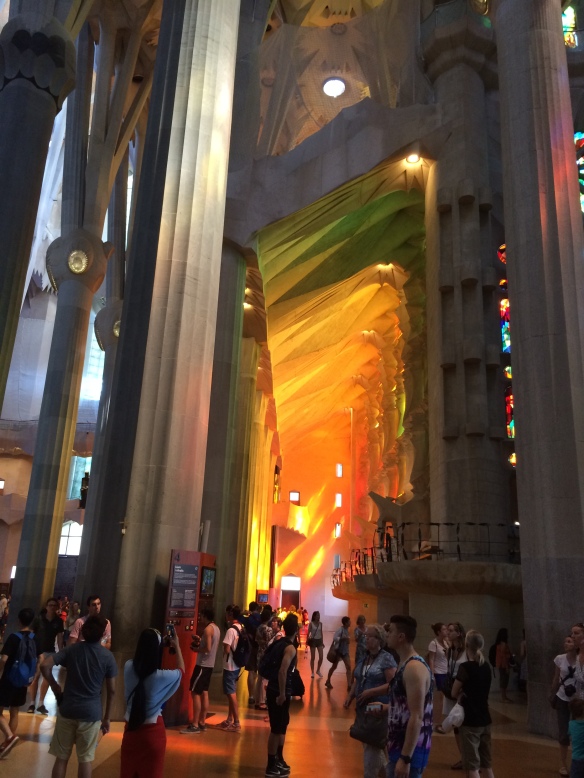 Stairs to the choir loft near the sanctuary, La Sagrada Familia

Even the organ pipes are transformed by the light

While the stonework and other elements are amazing and  impressive, for me, the experience was all about the light. I have lots of other photos, and I’d be glad to post them if anyone is interested, but I don’t think I can really say much more about it. The interior of La Sagrada Familia is a miracle of light that so encompassed and raised my spirit that the other details became unimportant. Finis.

When I was a child, we used to go to the beach for a few weeks every summer. One of our favorite activities was making “drip castles” out of wet sand. We’d grab a bucket of sand and water and carefully let the wet sand drip from our fingertips, making fantastic shapes and spires. The challenge was to see how elaborate you could make your castle, and how tall your spires could reach before collapsing.

In art history, my first take on seeing a photo of Barcelona’as La Sagrada Familia (Sacred Family) cathedral, designed by Antoni Gaudi, was “Drip castle!” I never blew it on the tests, either–the mnemonic was fixed forever. Apparently I am not the only one to see this resemblance, because when I searched for images of drip castles on Google, I found some photos of La Sagrada Familia as well:

The cathedral isn’t finished and won’t be for a decade or more, although it was begun in 1882. Up close, the exterior no longer looks like wet sand. The facade in the photo above (the Nativity Facade) is the one most photographed, I believe, and close up, all those furbelows resolve themselves into exquisitely crafted details. There are the obligatory religious figures, of course, but there are also twining vines, chickens, roses, standard Gothic features like columns that somehow turn into tentacles, rabbits, turtles and trees. It is naturistically sculpted, elaborate, whimsical and ebullient.

This turtle is one of two that hold up pillars, one on either side of what is now the main door. Kind of a metaphor for how mankind treats animals, though I’m sure this was not the intention.

Rooster and hens detail from the Glory Facade

This little lizard is one of many creatures peering out from the bronze leaves that completely cover the main door. He is peering through a small glass pane. The reflection in the pane is Tom taking a picture of it.

The other facades differ greatly in style. The Passion Facade, which depicts the end of Christ’s life from the Last Supper to the crucifixion, is sculpted in an austere, unelaborated and grimly modern style. some of it couldn’t be photographed because of ongoing construction.

The Passion Facade. The slanted pillars are intended to resemble bones. 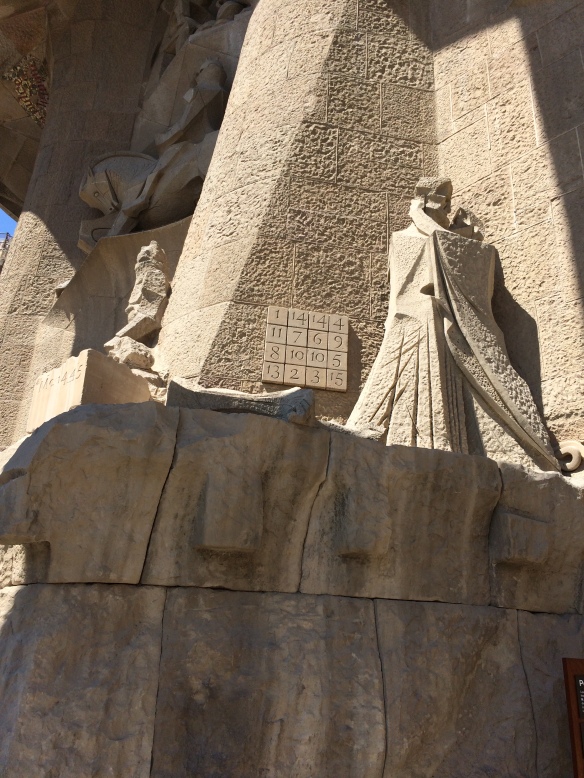 Kiss of Judas, Passion Facade. There’s a cryptogram square to the left, but I haven’t researched its meaning yet. 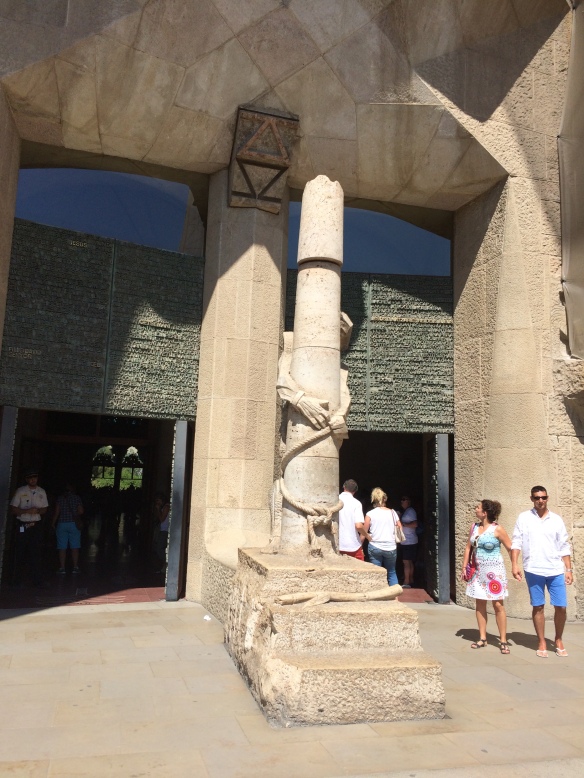 The Loneliness of Christ, Passion Facade

As you can see, this facade was executed in an entirely different style, and it was as deliberate as the Gothic-reminiscent naturalistic style of the Nativity Facade. There are other facades, still under construction, that are more modern still.

I took three art history courses (yes, once it was because I couldn’t pass chemistry, but the other times, it was because I WANTED to!), and not once did I see a photograph of the interior. As gob-stoppingly gorgeous as the exterior is, the interior surpasses it by several orders of magnitude. I have never seen anything like it. It comes close to being unbelievable, as though someone a 100 years ago had had the ability to use CGI to create something impossible and improbably beautiful.

Unfortunately, I have to close up shop tonight and continue tomorrow (or sometime soon), because we are catching a flight to go home. I want to give the interior of La Sagrada Familia the time and attention it deserves, so buenos noches for now, and I will be back as soon as possible.