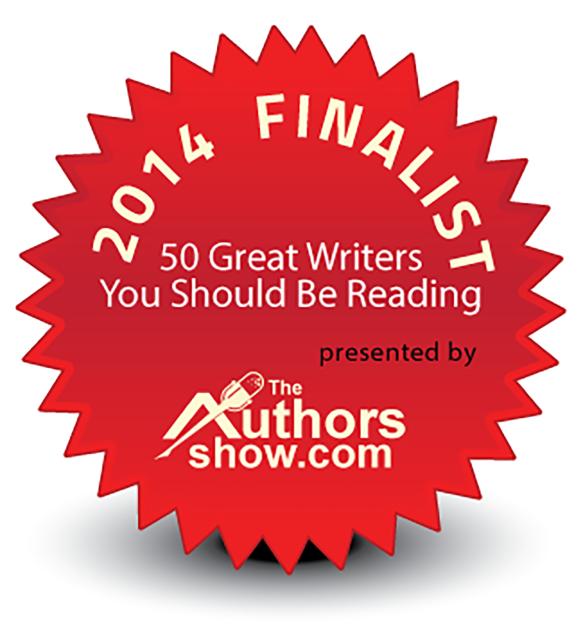 Thanks to David Prosser, a fellow writer/blogger who is as kind as a summer day is long, the link for final voting is http://questionpro.com/t/AJhWsZRq7r.

Again, “50 Great Writers You Should Be Reading” is a contest sponsored by The Authors Show. My sincerest gratitude to you for voting for me. As a new author, it’s an up-hill climb to get recognition, but this sort of thing really helps.

Last week, I was reading “The Barsetshire Diaries,” a blog about retired life in an English village by Lord David Prosser. (Is he really a lord? I have no idea, but he is certainly a noble man!) Lord D. published an interview with Sorin Suciu, the author of a humorous fantasy novel called “The Scriptlings.” Sorin mentioned he was with a new publisher with “an author-oriented business model and a heart of gold,” AEC Stellar Publishing.

Humorous fantasy? I stopped reading and went to AEC Stellar’s website, where I queried “The Obsidian Mirror” online. “Obsidian” isn’t written as a humor piece, but it does have a lot of humor in the writing—my way of sweetening the underlying theme of ecological threat and conservation.

The next day, to my astonishment, I received a request for the first chapter.

The day after that, I received a request for the entire manuscript and an analysis of my writing. Though disappointed by my score in “Writing Craft” (80.9%), the verbiage did say, “You appear to have a good grasp of the craft of writing… Your style of writing is likely to be well received by readers.” My score in “Marketability” of 88.6% made up for it. (“We believe your book is likely to succeed in today’s marketplace.”)

So now I am waiting on pins, needles and tenterhooks to hear back. I was told it would be three or four weeks, which seems lightening fast, considering that my submission to Harper Voyager in October of 2012 only just came back with a rejection notice. Apparently, the rejection was conveyed on the back of an unusually pokey snail.

Please wish me well. And many thanks to the inimitable Lord David and Sorin Suciu.

On a completely new topic, my daughter, my husband and I took advantage of a rare afternoon when we were all free to go for a walk on our favorite beach. It’s October, and the midweek population of beach-goers was negligible, despite the golden, warm weather and sunny skies.

It was low tide, assuring a flat, firm walking surface by the water’s edge and lots of flotsam to peer at. The small crabs are all gone. I suppose they have their season, spawn, and die, for there are many tiny, empty carapaces scattered about on the sand. 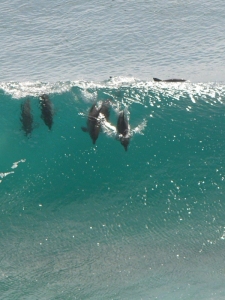 We walked for a mile and a half or so before turning back. Almost immediately, we began to see dolphins (or porpi) swimming just beyond the breakers. They rolled and splashed, and a baby broke joyously up from the waves, curved in a graceful arc and disappeared again.  We began to see dolphins surfing in the waves—something I had heard about but never seen for myself. As a wave rose up, the sun shone through, making it look like green glass. Inside the breaking wave, silhouetted against the light, we could see dolphins surfing along the curve and subsiding again as the wave foamed onto the shore. Then we began to see dolphins leaping out of the water, launching their entire bodies into the air, diving, then doing it again and again like enormous skipping stones.

Some days just make you glad to be alive.