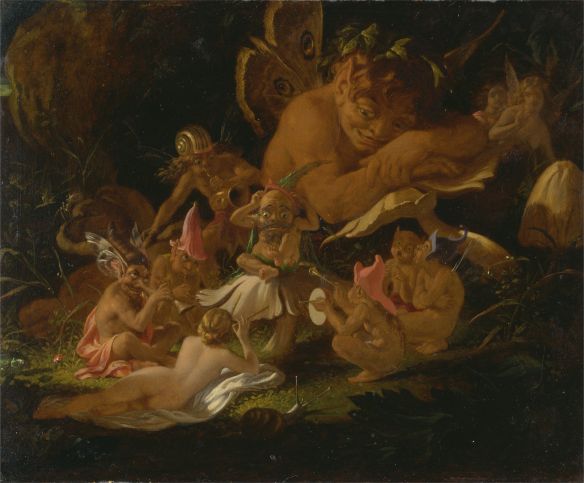 I just finished reading Terry Pratchett’s “Folklore of Discworld,” co-written with folklorist Jacqueline Simpson. (Do people actually get paid for knowing about folklore? What a great job!) Pratchett and Simpson discuss the relationship between the Discworld’s traditions and those of Earth (with the conceit that folklore, tropes and memes are particles of inspiration that drift across the multiverse, so that myths of Discworld wind up here, and vice versa).

While reading (actually listening to) this book, it struck me how deeply I am attracted to the folklore of the British Isles (although this is obviously not a particularly rare trait, as evidenced by libraries full of epic fantasies, tales of witches and warlocks, dragons and cloaked heroes and faeries). Nothing entranced me more as a child than tales of banshees, pookahs, faeries, disappearing gold pieces, leprechauns, elves and pixies. As an adult, I am still entranced by Tolkein, C.S. Lewis, G.R.R. Martin, and many less well known authors who write in that tradition—whether humorous or not. It’s one of the reasons I adore Pratchett, who once remarked that he regarded folklore much as a carpenter regards trees.

Why be so attracted to the folklore of another place? I could put it down to my Scots-Irish ancestry. But I think the real explanation is that the folklore of my own time and place is sparse and rather unimaginative. Perhaps if I had grown up in Louisiana or some place with more history than California, I would have a healthy backlog of swamp critters, ghosts, haunted mansions, and eerie sightings to freshen the imagination. As it is, I am hard put to say exactly what constitutes folklore here.

Sure, we told each other the stories about the guy and girl making out in the car who hear on the radio about the escaped madman with a hook for a hand. And step on a crack, break your mother’s back. (As this never happened, I didn’t believe it for long.) But these things lacked the enchantment I found in fairy stories and old tales from Ireland, England, Wales and Scotland. Witches, warlocks and wizards. Spirit horses. Water nymphs. Faery gold. Selkies. Leaving milk out for the Good Folk. Strange dancing lights on the moors at night. The Wild Hunt. King Arthur.

An incredibly high percentage of American “folklore” has disappointingly mundane origins. Paul Bunyan and his giant blue ox, Babe, appears to have originated in the oral tradition of lumberjacks, but according to Wikipedia, was “later popularized by freelance writer William B. Laughead (1882–1958) in a 1916 promotional pamphlet for the Red River Lumber Company.” Rudolph the Red-Nosed Reindeer was originally a promotional character created for Montgomery Ward. Pecos Bill was a character created by short story writer Edward S. O’Reilly in the early 20th Century. Johnny Appleseed was a real person, John Chapman, but all he did was plant apple trees, not conjure gold and silver apples or something interesting like that. Santa Claus comes closest to having true folkloric origins, but in America, even he was largely shaped by modern forces in the form of Clement Moore, author of “A Visit from St. Nicholas” in 1823:

“His cheeks were like roses, his nose like a cherry;
His droll little mouth was drawn up like a bow,
And the beard of his chin was as white as the snow;
The stump of a pipe he held tight in his teeth,
And the smoke it encircled his head like a wreath.
He had a broad face, and a little round belly
That shook when he laugh’d, like a bowl full of jelly:
He was chubby and plump, a right jolly old elf,
And I laugh’d when I saw him in spite of myself…”

Moore changed the majesty of Father Christmas, a tall, thin gentleman wreathed with holly and robed in green, into a “right jolly old elf,” later immortalized in his modern incarnation by the Coca-Cola Corporation. Moore also invented the eight tiny reindeer, which were not found in the stable of Father Christmas.

Where’s the magic in all this? Sadly lacking, in my opinion. Our modern American monsters are the psychopaths, serial killers, stalkers of children, terrorists real and imagined, and that guy with the hook, who may be folkloric, but he’s not very magical. Our urban legends may technically be folklore, but flashing your headlights getting you in trouble with gangs, or tapeworm eggs in bubble gum, or waking up in a bath of ice with your kidneys missing falls well short of enchantment.

I will admit that we Americans have our share of cryptozoids. Probably the leading examples of this are Sasquatch (Bigfoot) and El Chupacabra (the goatsucker). El Chupa is an import from Mexico, where apparently they are so folklore-rich that some of it is oozing across the border. None of these to my knowledge is actually magic; it’s just that no one has ever proved they exist, so of course, lots of people believe in them. Here’s a map of North American cryptozoology, if you’re interested in more.

As I mentioned before, it may depend on where you grew up. In Hawaii it is clear that many ethnic Hawaiians (and also many non-ethnic Hawaiians) believe in the old lore. I met people who believe in ghosts, in Pele and other ancient gods, in Menehune, and in spirits generally, both good and evil.

Magic offers the possibility of the good and brave and clever overcoming evil or at least magical trickery, whereas our monsters are sometimes overcome by the judicial system (and sometimes not). Magic also casts a glamor over folk tales; in fact the word “glamor” used to mean magic or enchantment. Our “folk” heroes are artificially created to make money—although they are still presented to schoolchildren as though they were genuine. I suppose Pratchett would say that when people start to believe in something, it transforms that thing into folklore. But no one really believes in Paul Bunyan or Pecos Bill. Thank heaven, some children still believe in Santa Claus, and around a campfire at night, you can believe anything. But I still think we are a culture that is sorely deprived of a true folkloric element.

Do you agree or disagree? Did you hear a truly magical (and American) story when you were a child? Did you have a haunted house on your street where lights and music could be heard at night? Were tales of helpful pixies or harmful sprites told in your neighborhood?

I would love to hear from you if you have such stories to tell!