Tom really is a hero. He agreed to drive the steep, winding, one-lane road back to Halawa Valley so that we could visit the beach there and maybe hike to the waterfalls. He surprised me–and this is after 43 years of marriage.

The drive was spectacular, and we stopped to take photos of things we remembered, but hadn’t stopped for the first time because of unfamiliarity with the road. For instance, there’s this sign: 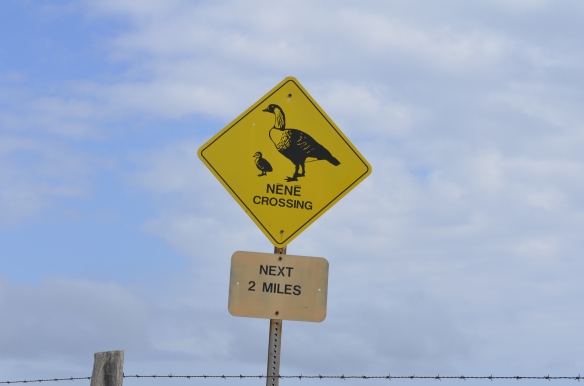 Nene (pronounced nay-nay) are the native Hawaiian geese, and they are endangered. Sadly, we didn’t see any geese, just the sign. We also saw this, which we think is a roadside memorial, but it’s a bit different than the usual. In addition to the sun made of white coral, there were offerings: 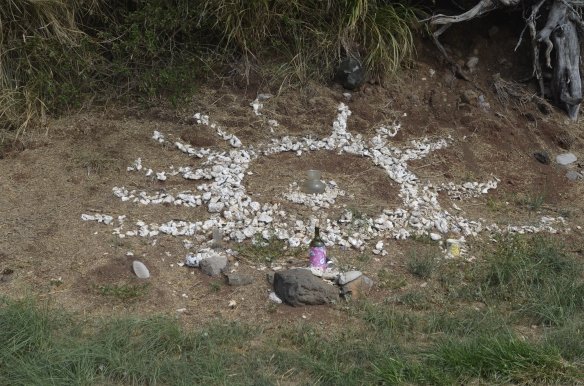 There was no one waiting at the bottom of the road this time. We parked and walked down the dirt road to the beach. There is a river flowing into the sea here, and it’s  picturesque: 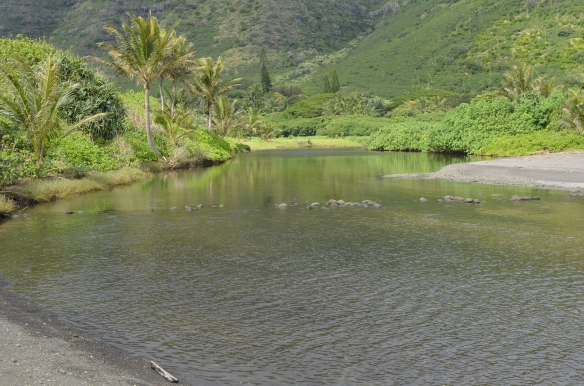 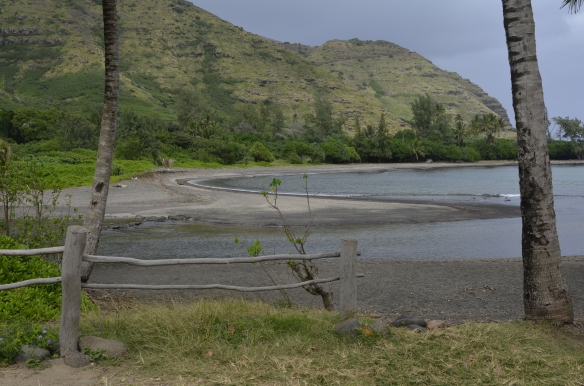 We picked our way along the beach, and I saw what I expected; lots of small pieces of plastic in the sand, white and blue, black and gray, yellow and red–the detritus of the Great Pacific Garbage Patch, collecting on this remote beach. I began picking up the larger pieces and putting them in my pocket. by the time we left, both pockets were bulging, and my arms were full of still larger chunks, bottles, and a small section of plastic fence. Tom gently makes fun of my plastic policing, but I regard it as the little that I can do to make it better. Worth nothing in the face of the magnitude of the problem, I agree. And many of the pieces were so small as to be impossible to retrieve, reminding me of “Rumplestiltskin,” where the poor girl has to count all the grains of sand or spin straw into gold. 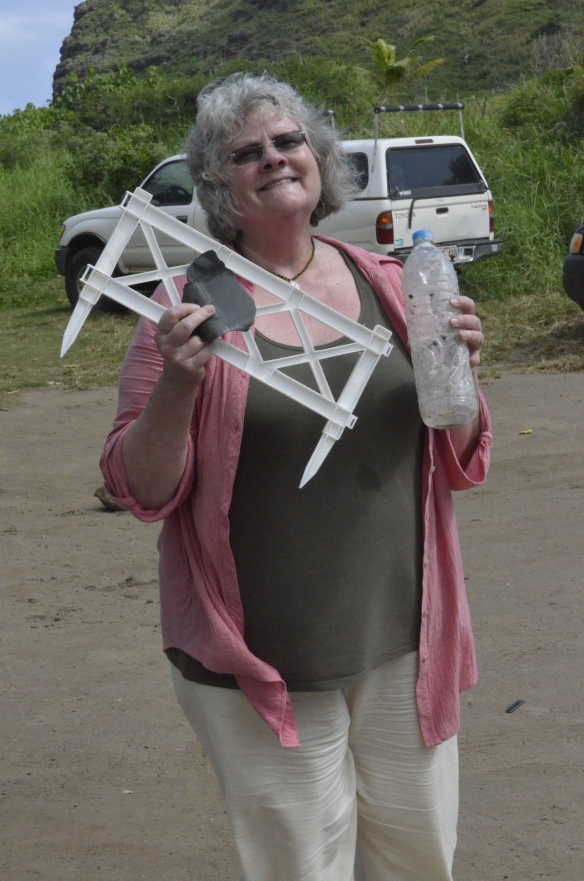 Some of my plastic finds. Pockets are bulging with smaller bits.

A Hawaiian family was picnicking on the beach. A young woman named Noni (noh-nee, means “beautiful”) was sitting on the sand, while her sister, husband and nephew were on the rocky point under the cliffs, fishing. We chatted for a while, and then her husband came back with a net bag full of ‘opihi (oh-pee-hee, limpets). We asked what they were going to do with them, and he said they were best barbecued, but could be eaten right out of the shell. Did we want to try one?

Yes, we did. He had lost his knife while prying ‘opihi off the rocks, but he used one limpet shell to dislodge the resident of another shell, and offered us some. They were rubbery, and the primary taste was a mild saltiness, but I’m sure they are delicious barbecued. This inside of the shell had a lovely iridescence, tinged with green. I washed mine out and brought it home with me. 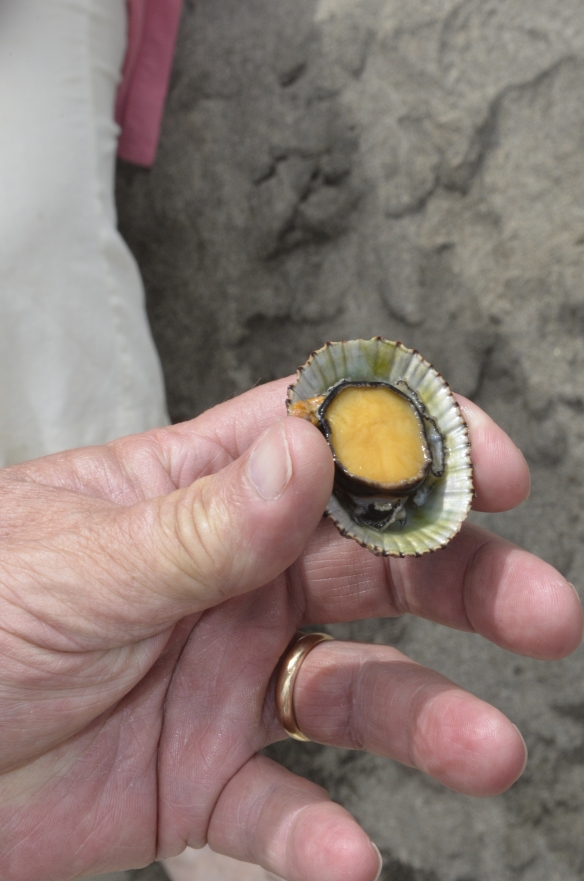 We asked about the hike to the falls. Noni said it was really difficult, and she hadn’t done it in 20 years, so we decided to give it a miss. (Later, I learned that it takes two hours just to get there. I probably made the right decision.) After dumping my collected plastic in the trash bins provided, we got into our car and drove slowly back, taking pictures as we went.

Once we were back in two-lane country again, we stopped to take a picture of this: 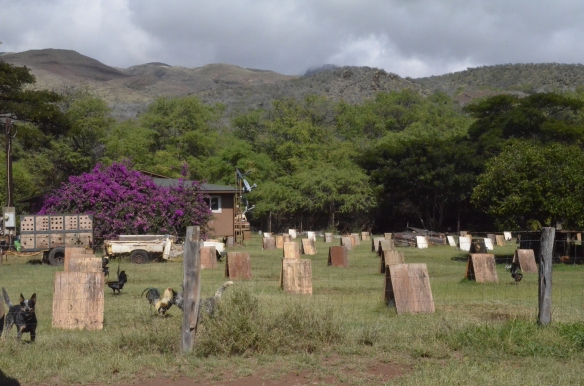 I called it “chicken condos,” as they appear to be individual shelters for chickens or roosters. As I was taking the picture, a pack of dogs ran up to the fence and barked their heads off. A very large Hawaiian came down the drive, looking rather menacing. I waved and said I was just taking a picture of his chickens. He didn’t smile, but waved more or less amicably and went back down the drive. My guess is that he’s raising fighting cocks, which is abhorrent, but I don’t know. 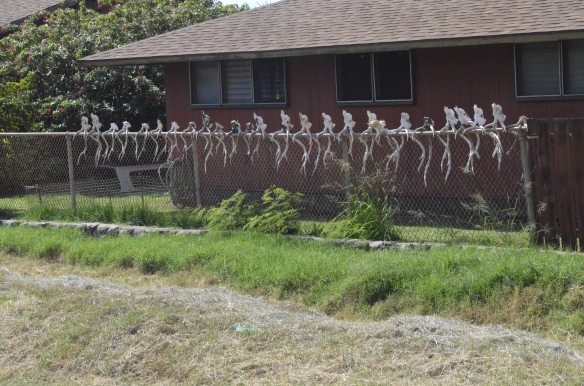 The only real proof we saw that there are deer on Moloka’i.

We also stopped at a grove of coconut palms, right outside of Kaunakakai. This used to be a much larger grove called “the Queen’s Grove,” because it was planted for the wife of King Kamehameha V. It’s right by the beach, and the trees must be 100 feet tall, each with a cluster of coconuts clinging to the top under its fronds. There are piles of coconuts on the ground, both fresh, green ones and old, hairy ones. The top of my head began to feel peculiarly vulnerable as I imagined what a coconut would do to it after a drop of 100 feet, so I left. 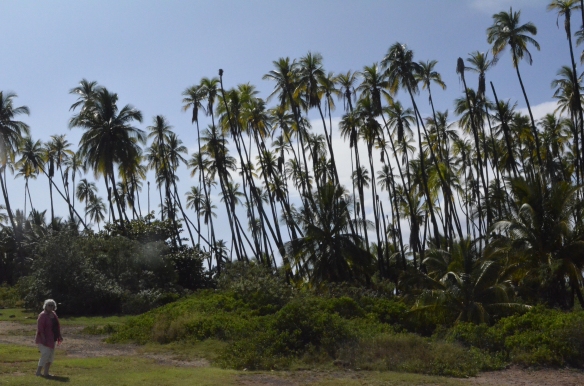 Then back to the condo. I was very behind in my journaling, so spent most of the late afternoon writing, listening to the waves crashing on the rocks nearby, and enjoying the trade winds. When we went to bed, another three-inch centipede was occupying the hallway upstairs, and I gave him the same treatment I gave Jesse the Centipede a few nights ago–a beating with my flip-flop. Neither centipede put up a fight, making me think they were unwell to begin with.

And so the journey came to an end, as all journeys must do–which is the beginning of another journey for me; writing a new novel. The entire experience was amazing. People were so helpful and kind, so willing to bring me into their lives a little bit. It was extremely touching, and I will never forget the experiences I had here. As a parting wave, here are the signs that greet new arrivals to Moloka’i, and bid departing travellers farewell: 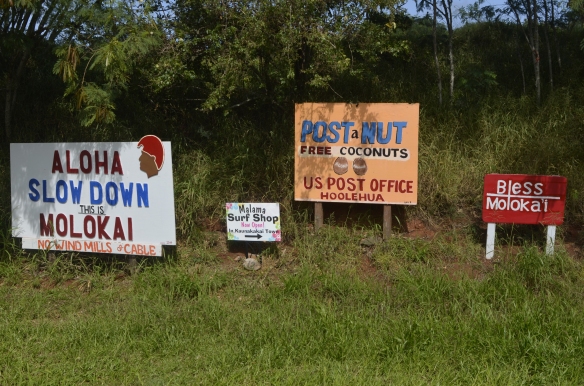