One of the more colorful tombs in the Isla Mujeres graveyard.

After a restless night (me, not Tom), we wished each other happy Valentine’s Day and got into the cart to drive to town. I was much less freaked out this time. Breakfast was the first order of business, then we needed to get the cart gassed up and the wheel fixed. The rental place was right in the middle of a shopping area filled with tiendas offering artisanal crafts and touristy tchachkis, and I wondered why Francisco had not brought us here. Who knows, but I spent a couple of hours going through the shops looking for gifts. I saw all kinds of cool stuff, and a whole lot of crap, but I had no desire to haul heavy woodcarvings or painted (and fragile) pottery home, so I was primarily looking for small, non-breakable, lightweight things.

I asked around for sea glass jewelry, as that is our daughter’s passionate hobby. I only found one shop that had it, and it consisted of monumentally ugly, poorly worn pieces set clumsily in huge, heavy silver collars. I finally did find a few pieces of delicate, beautifully designed jewelry in one store, but nothing with sea glass. I think based on what I got, that she will forgive me. 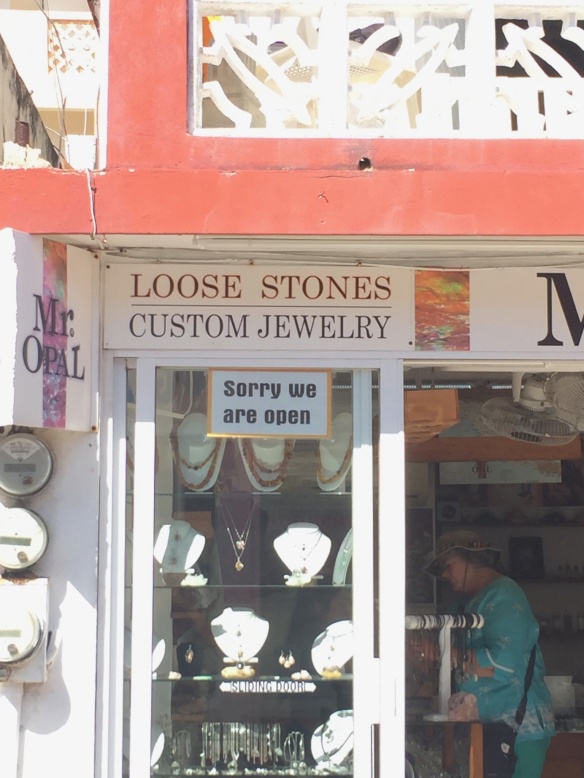 Great little jewelry store, but look at their “open” sign.

Tom, as always, followed me around while I shopped without the slightest impatience, bless the man. Once I concluded the hunt, we picked up the cart–but we got a new one with no wobbly wheel and much more get-up-and-go than the original. We called it No. 8, as that was the number painted on the side. No suspension, but a huge improvement nonetheless, as it no longer wobbled and had a bit more get-up-and-go. We went to a beach where someone had told us you can find sea glass and found a lovely little swimming area, but no sea glass. I suspect that the sea glass here is of the broken beer bottle variety, anyway, but I’ll keep looking.

We came back to the hotel. I was somewhat disturbed to find a squashed, three-inch cockroach lying by the bedside table, still waving its legs. I wasn’t disturbed by the cucaracha so much–it’s the tropics, after all–as the fact that we hadn’t squashed it and the maid hadn’t done the room yet. I sent it to Xibalba (the Mayan realm of the dead) down the toilet and mopped up the mess. Nothing was missing or amiss, so oh, well. It’s not as if I brought my diamond tiara with me. We returned to the Cubano restaurant for more excellent guacamole and a ceviche to die for, with octopus and conch in it.

And then we did nothing. Just nothing. Until about 8:30 pm, which is about a half an hour before most of the local restaurants close. We weren’t starving, so we went to Chedraui down the street, which is sort of a supermarket combined with Costco—you can get everything from mopeds and washing machines to fountain drinks, dried hibiscus flowers and fish. We got some cheese, crackers, wine and snacks and went back to the hotel for a modest repast, using our kitchen for the first time.

We set our alarm for the next morning, as we were scheduled for a snorkeling tour at 10 am. However, the weather was projected to be quite windy, followed the next day by rain. Windy conditions are poor snorkeling conditions, so we rescheduled for after the rain.

As that was our big expedition today, we had to make new plans. We had breakfast at Lola Valentina, where we had eaten the day before, and the staff recognized us, which is always nice. I didn’t feel like a heavy breakfast and had fruit and yogurt. Then we visited the cemetery.

I adore cemeteries. The older, the better. This cemetery features the self-carved gravestone of Juan Menaca, although apparently he was buried in Merida. I wanted to find his stone, but the cemetery was sufficient on its own to delight me. The majority of the tombs are created by hand, each one different, and each one a very personal tribute to the departed, which is what I love about such places. Mexicans have a very personal relationship with their dead. Everyone knows about Dia del los Muertes, Halloween, where families picnic among the tombs and catch up their dead relatives on the doings of the past year. They share food and drink with their departed loved ones and have a lively family party.

Most of the tombs in the Isla Mujeres graveyard were designed like little two-story houses. The top story was often enclosed by glass and protected with miniature wrought-iron grills like most Mexican houses. These enclosures were often locked with padlocks, though in some cases the closure was a simple wooden latch. Inside were offerings of liquor, plastic and real flowers, little Madonna statues and angels, candles, and other things. One fancy tomb had an entire bottle of sparkling wine. Many of the structures are electrified–I’d like to see it at night. The monuments come in all sorts of designs. While most looked like little houses, one looked like a Roman temple, and there were many other variations. No two were alike, although there were several identical angel statues, each holding an index finger to her lips, the other index finger pointed heavenwards. It had the effect of a bunch of very bossy librarians. 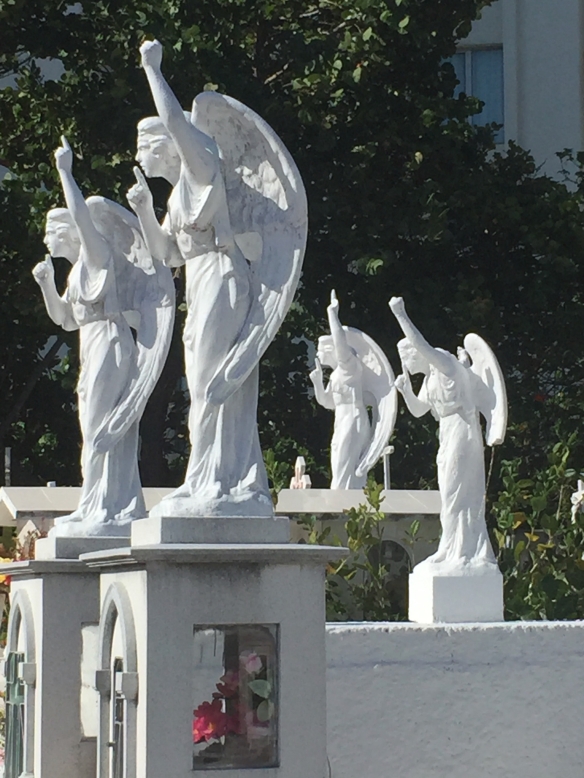 “How many times do we have to tell you to BE QUIET???”

Some of the tombs were crudely fashioned, others were elaborate. One looked like a suburban house, complete with artificial turf lawn. Another was fashioned in the shape of a ship–several were dedicated to sea captains, which makes sense on an island. One of the captains’ tombs had a railing composed of concrete ship’s wheels and a model ship resting in a large glass case in front. I assume it was a model of the captain’s own ship, or perhaps something he created. One structure that was made to look like a cottage was painted white with twining roses painted around the door. Several were covered in ceramic or marble tiles. The larger and taller monuments had built-in steps along the side. At first I thought perhaps these were for the deceased’s spirit to reach the offerings, but I soon realized the steps were there to allow the living to reach the little offering houses and replace the contents. 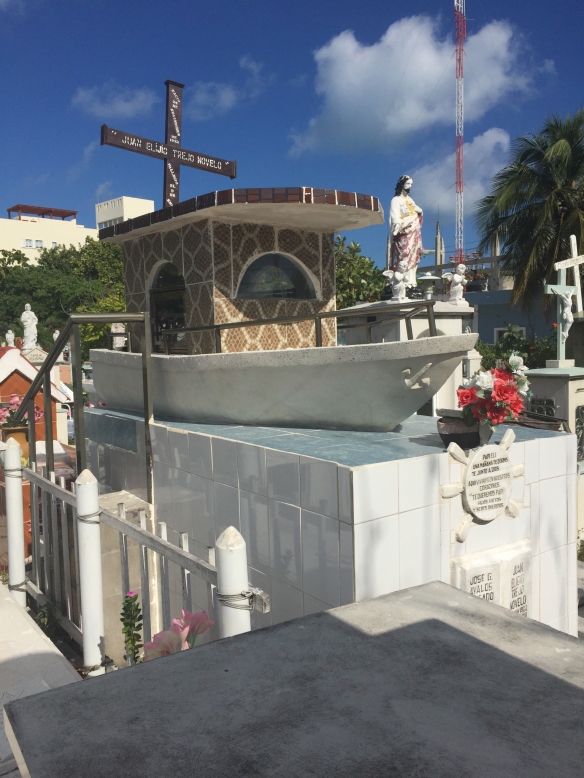 This captain still sails his boat.

Sadly, hurricanes and time have damaged many of these momento morii. The sandy ground is littered with broken marble, glass tiles, shattered bottles and glasses, and so forth. But you can sense the care and love with which these tombs are created and­—as much as possible—maintained.

We did not find Juan Menaca’s gravestone. Disappointing, but even I finally gave up. We ran a few errands and had a nice lunch and did some shopping. We did finally discover the “fiesta artisanal,” and there were some very beautiful items, some different than in the surrounding sea of tiendas, but I didn’t buy anything.

Some tombs were modest, others elaborate, but each one was different. 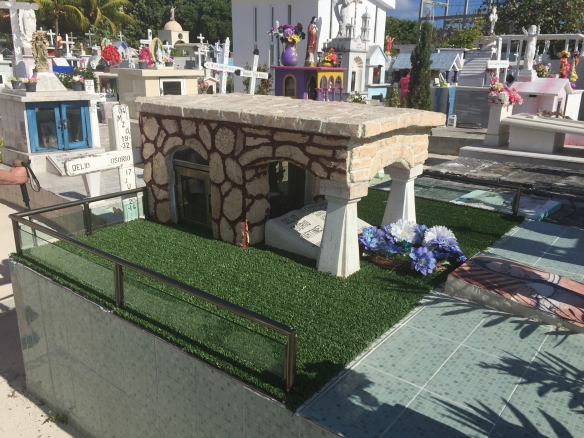 This one had its own lawn and a fence around the yard.

The afternoons here tend to be sweltering, even though there is always a breeze. I thought it would’ve been a nice day to swim at Playa Norte, but we stayed in out of the heat instead. Toward sunset, I thought we should go to Punta Sur and watch the sun set. Traveling south in No. 8, I saw a dog enjoying the evening breeze. This would not have been unusual except that he was lying on top of the peaked roof of a portico that stretched out in front of a house. I still wish I had gotten a photo.

When we got to Punta Sur, the facilities were closed for a wedding, but we did sit out and watch the dramatic clouds as the sun set and the storm began to gather. Frigate birds, looking like a flock of pterodactyls, hung on the wind far above us, not fishing, not doing anything, as far as we could tell. Perhaps it is enough to be able to suspend oneself above the sea like a hang-glider, taking in the gold-edged clouds, the towers of Cancun, the little rocky island below, and the darkening waters.

2 thoughts on “The Most Cheerful Graveyard in the World”