It’s been a while since I have shared what I am working on. I blogged extensively about my research visit to Hawai‘i in January of 2015, but I’ve been on radio silence about work ever since.

Part of that is because if I say too much about the story, why would you want to read it when it is published? Another issue is providing detail about a story that might very well change so drastically in the writing process that it becomes unrecognizable.

I did mention that it has been much easier writing with a plot outline than without one. And that was certainly true until I wrote up to the intended climax of the story—and discovered that it wasn’t actually the climax after all and I needed to extend the story (for which no plot outline yet existed).

Part of the problem was that I hit the putative climax at about 65,000 words into the story. That means that I would have wrapped it up in about 75,000 words, which is a bit light for a novel like this. “The Obsidian Mirror” was about 100,000 words, and I am aiming for a similar length for this novel.

So I hit a rough patch as I floundered around trying to figure out what comes next in the story. I hesitate to call it “writer’s block” because I wasn’t blocked. I knew where the story was going, I was just missing a piece. Sort of like Indiana Jones crawling across a rope bridge across a steep chasm and there’s ten or fifteen planks missing in the middle. And crocodiles (my publishing contract and deadline) waiting below.

And then there was getting sick. Then the holidays. El Niño came for a visit last week and flooded the basement, soaking our family photos, my oil paintings, family historiana, and a lot of other stuff. I spent this past week gently prying apart photographs and arranging them on every available surface to dry, turning them over, grouping them, and tossing the ruined ones away. I did no writing at all.

Among the things I found was a packet of letters, all dated around 1879. They were written by someone named Carrie to her cousin, William Smith of Roxbury, NY. (Mr. Smith was one of my ancestors, which is how I came by the letters, but I haven’t looked him up to determine exactly what the relationship is.) They were written in a delicate copperplate hand, very legible, the India ink still clear and sharp despite their age and the complete saturation of the paper.

I reluctantly decided I would have to throw them out. There were so many of them, and my priority was rescuing my thousands of family photos before they stuck irretrievably together. I read a few of the letters and they were fairly mundane, though written with clear affection for the recipient. I felt guilty. They had been kept perfectly for 110 years, and I was the one who trashed them.

However, I found a poignant little poem in Carrie’s spidery copperplate. Here it is:

You I will remember

And in this heart of mine

A cherished spot remains for you

Untill (sic) the end of time.

When this you spy

And think of me that is very shy.

When this you see

And think of me that thinks of thee.

Where ‘ere you tarry.

And think of me

That will never marry.

The last stanza was enclosed in brackets. What do you think? I don’t mean Carrie’s gifts as a poet, which are slight, but the heart of it. I think Carrie was in love with William. I have at least saved her poem, which must have cost this shy woman a great deal to share with her adored cousin.

That much of Carrie I am keeping, safe for now. 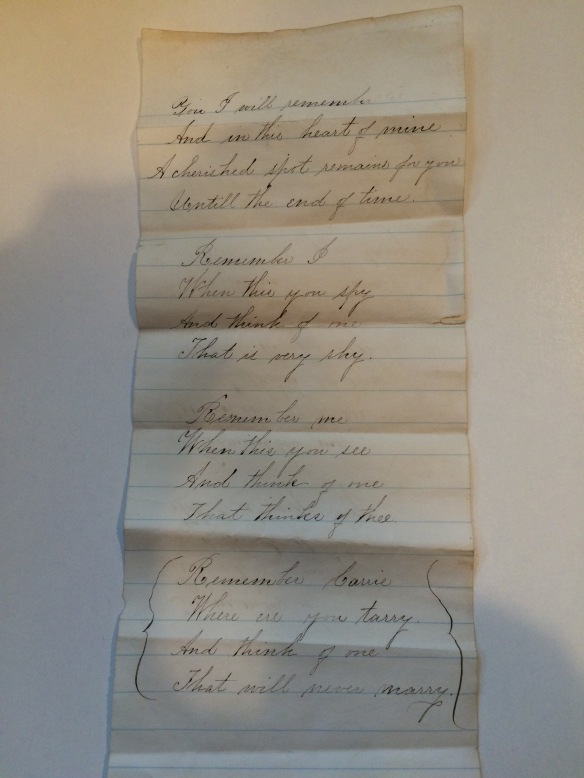 Getting back to my current book, I am firm on the title of “Fire in the Ocean.” It is set in Hawai‘i, which was built—and is still being built—by fire in the ocean: volcanoes. It also touches on the Great Pacific Garbage Patch, where billions of tons of particulate plastic are swirling around out there like peas and carrots in alphabet soup. Hawai‘i is smack dab in the middle of it. The slow dissolution of chemicals from the plastics is another form of “fire in the ocean,” poisoning sea life. And, of course, Pele, the goddess of volcanic fire, is a featured character in the book. Those of you who followed my blog from Hawai‘i know why I couldn’t leave Pele out of the story.

I am back on the job writing. El Niño is paying another visit, but we have pumps going and sandbags. All my rescued photos are safe and dry now and my oil paintings are drying out in the bathtub. Good time to write! 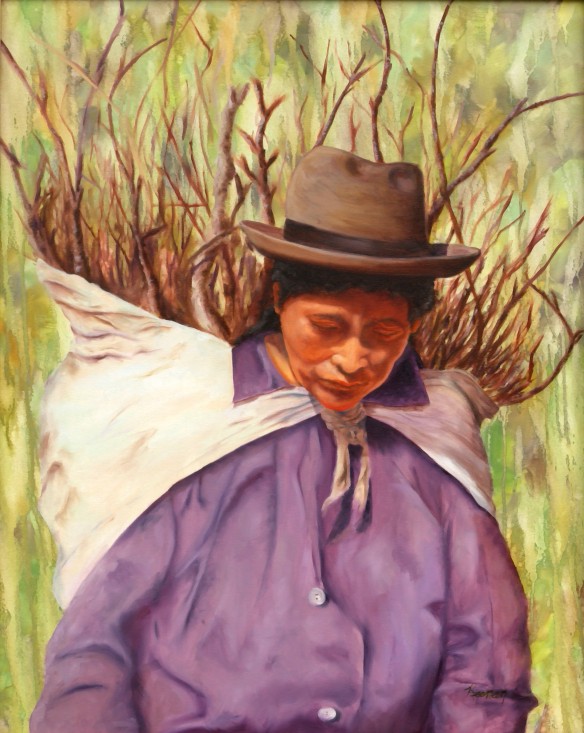 “The Burden” This is one of my oil paintings, now residing in my bathtub. It won a first prize somewhere obscure.