This was our snorkeling day, so we set our alarm. We had to be at the Kaunakakai Wharf by 6:45. We ate a quick breakfast and set out in the dark. We could see the bright lights at the tiny Molokai airport as well as the wharf as we came down the rise from the west end of the island; Molokai is only 38 miles long from the west end to the east.

I thought Tom should leave his camera in the car. It is large (especially the lenses) and heavy, and I was afraid it might get damaged or get water in it. So no pictures, but I’ll post a few photos of the kinds of fish we saw, even if they aren’t the actual fish we met.

We drove straight out onto the wharf and parked near our boat, the Coral Queen. A young Hawaiian man told us nicely not to park there or we would get a ticket. This turned out to be Gabe, the boat’s one crewman. He would take the divers down while the captain kept an eye on the snorkelers.

This was a surprise. Diving implied deep water, so I asked about it. The captain (whose name I failed to remember) said they had more than 40 different places to take people, depending on whether they had a mixed group (snorkelers and divers), or just one or the other, and of course depending on tides, currents and weather.

There were about a dozen of us. They waited a while for some latecomers who never showed, then set out along the eastern shore in the dawn light. On our way out, they pointed out a handsome white yacht moored offshore and said it was Larry Ellison’s.

The Molokaiians are very hopeful about Mr. Ellison, the fifth wealthiest man in the world, and the founder and former CEO of Oracle Corporation. As you may know, he bought the entire island of Lanai a little while ago (98% of it, anyway). The people of Lanai have been very happy with the changes he has brought to that island, and the Molokaiians are hopeful that he will buy up the now-idle holdings of the Molokai Ranch. This would certainly make a huge difference; it remains to be seen if it’s a difference the people of Molokai will like. They have a slogan here: “Don’t change Molokai, let Molokai change you.”

It was calm, quite unlike the first few days we were here. It was interesting to try to locate landmarks on shore that we had earlier seen from the road, but we never got as far as Leimana’s fishpond. 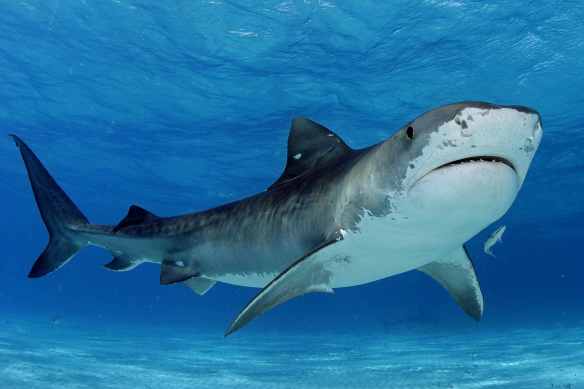 Tiger shark. I mean, come on. Is this something you want to go swimming with?

I said, “I don’t mind black tips, and I have swum with them, but the others…tell me that there won’t be any sharks out there today.”

Gabe struggled with his conscience for a moment, then looked straight at me and said, “There won’t be any sharks out here today.”

Bless the boy. I am sure I would have to change my bathing suit if I saw a hammerhead. Or any other shark, for that matter.

We saw humpback whales as we chugged along. They never came very close, but we did see them spouting and breaching a little ways off. 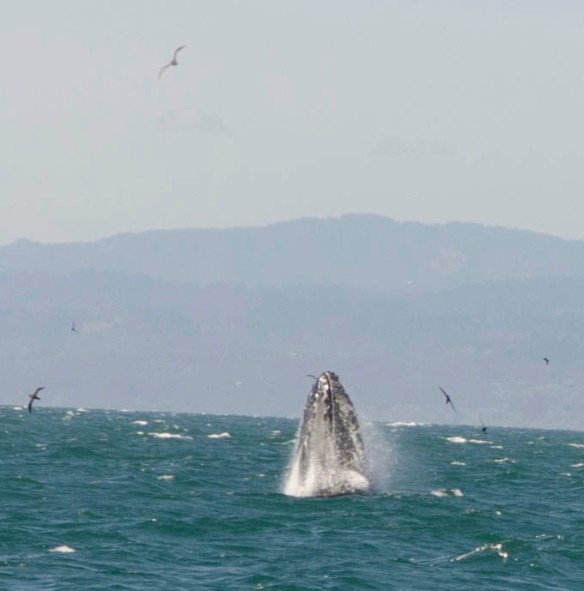 This is a picture of a humpback whale Tom took when we went whale watching in Monterey Bay.

Eventually, we anchored (using a special anchor to avoid damaging the coral) and the captain pointed out the area the divers would explore, and further toward shore, the snorkelers’ area. As we were preparing to go in, a manta ray swam slowly next to the boat–the first I have ever seen.

As I flapped my way to the stern in my fins, a woman in a shortie wetsuit said with surprise, “No wetsuit?” I was surprised by the question. This was Hawaii, right? Who needs a wetsuit? They had them aboard the Coral Queen, but it hadn’t occurred to me to don one. I penguined onto the platform that had been lowered from the stern and fell backward into the water. It felt fine, neither warm nor especially cool. Tom joined me and we headed out.

Molokai is surrounded by a fringe reef that extends outward from the island a long way. You could walk out a mile in some places and still be in water up to your knees. We were probably a mile and a half from shore, in water that was about 12 feet deep. There were lots of fish to gawk at–schools of goatfish and convict tangs, triggerfish, butterflyfish of several varieties, bird  and rainbow wrasses, pink and silver juvenile parrotfish, mature rainbow parrotfish (a blaze of different colors), and one humu-humu-nuku-nuku-a’pu’a’a. I am never quite content snorkeling until I see this dapper little fish with his colorful suit and enormously long name. 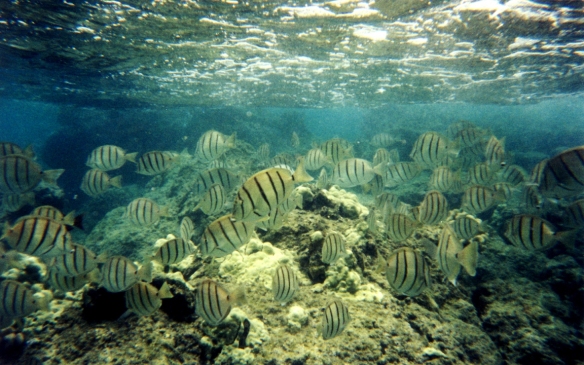 School of convict tangs. This really looks like what we saw. 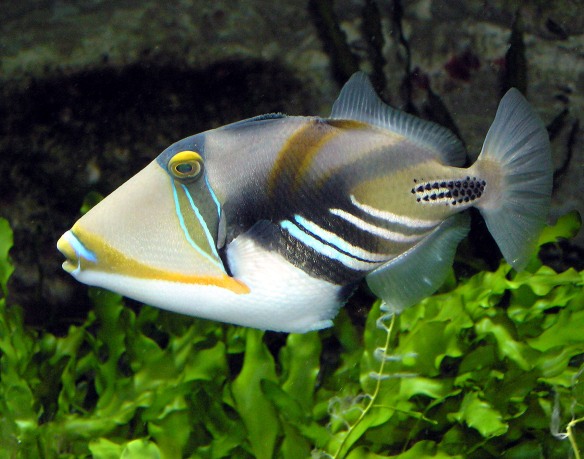 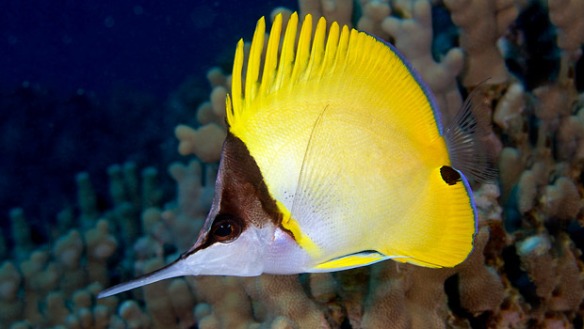 To my surprise, my hands began to get numb and they turned white (whiter than they usually are, that is). That had never happened before while snorkeling. I didn’t think we had been out more than a half an hour, but I told Tom I wanted to go in. He agreed and we headed back to the boat–to find that we had been out an hour and fifteen minutes, and it was time to go anyway.

It appeared that we were going to go to another spot to explore. I felt quite chilled and decided not to get back in.

I struck up a conversation with Gabe. Tom had discovered that Gabe was a third cousin to Leimana, so I mentioned this and said we had enjoyed our time with Leimana at the fishpond.

“Yeah, he’s really something, isn’t he, with his thing…” Gabe indicated the swimsuit zone.

“…malo, and you can see his whole butt hanging out,” said Gabe.

Gabe looked profoundly shocked. I guess he thought pudgy old ladies were past appreciating these things, or perhaps he had never viewed his third cousin in that light.

I went forward to sit in the sun and get warm. This felt great, and my hands got warm again. However, after a bit, I felt my Irish skin had had as much solar exposure as was wise, and went back under cover. While I was sunning, though, I saw a huge turtle swim by under the deep turquoise water. He swam slowly, balletically, and I watched him until he disappeared into the depths.

While we were waiting for the others, we chatted with the captain. He had been a “bean-counter,” his words, in Minnesota. He used to come to Hawaii on vacation, and finally realized he didn’t have to live in Minnesota.

“Why Molokai?” we asked.

“It was the last island I visited,” he said.

He bought Molokai Fish and Dive, then bought the gas station next door. (Giving us the opportunity to buy gasoline at a filling station called Fish and Dive.) We commented on the high prices in the islands. Gas in our area is now close to $2 a gallon, but in Hawaii, it is more than $4. He told us that their prices were dependent on the last tanker, and they didn’t change until the next one arrived. I noticed that Fish & Dive gas prices were identical to the one other station on Molokai, a Chevron.

The divers and snorkelers came back raving about the wonders they had seen–turtles, mantas, even a sleeping white-tipped reef shark. Someone said that the water seemed warmer at this spot, and the captain said, “Yes, it is. There are freshwater springs back at the other place that make it colder.”

I said, “It would’ve been nice of you to have mentioned that an hour ago.”

But I think staying out of the water at the second location was the right decision. After we came back, Tom and I were exhausted. We had lunch at the Kualapu’u Cookhouse, and I could hardly keep my eyes open. I had fried saimin with vegetables, which proved to also have Spam and fake crab in it. Spam, in case you aren’t aware, is a favorite here in the islands. If you are eating in an establishment frequented by locals, you will find it on the menu.

I fell asleep on the ride home, and as soon as we rinsed ourselves and our equipment, we both fell into bed and slept the sleep of the truly depleted. We awoke in the early evening, forced ourselves to cook dinner (we had purchased grass-fed beef from the Molokai Meat Cooperative), ate it, and went gratefully to bed without doing the dishes.

4 thoughts on “Snorkeling off Molokai, Followed by Not Much”